David faced a huge challenge. If I am facing a seemingly insurmountable challenge, God often reminds me to ask myself: "Is this challenge after God's own heart?"  Sometimes I've created the difficulty,  God hasn't.  But in this season of   life many  of my challenges are from the Loving  God, and they are usually to do with my trust in Him.  Do I trust Him to do what He said He would do?  And do I act, believe, rest and speak as if I'm living in that trust?

Goliath was the epitomy of an arrogant egotist. Arrogance  is  believing a self-created lie about oneself and one's power. In reality, human power is the exact opposite of God-given authority.  So, in the account of David and Goliath (1 Samuel 17), what did David's enemy "believe" about himself?     Goliath believed he was stronger, larger and more confident than God's man, and God Himself.  Goliath mocked God.  This is good news, in the sense that it brings out into the open his evil motive. Mocking God is a position which  is eternally "un-winable". As a Christian, who prays for Israel and the Jewish people,  I can see that this principle  applies aptly right now to  the American administration, the United Nations, the liberal media and the apostate church.  They are mocking God, believing  they know better than Him, regarding Israel and  her enemies.

David's reply to Goliath is key:

"You are coming to me with sword and with spear and with javelin." i.e.: human weapons. One can add in here; human control, human power, the spirit of religion as opposed to true faith and intellectual secular arguments.

David continues:"But I am coming to you in the name of YHVH of hosts, the God of the armies of Israel."  (1 Samuel 17.45)  i.e.: David said, I am no one.  It's the One True God that has the strength to deliver us from your arrogance. I'm deeply grieved that you are mocking Him.    Look at His Power and His Truth. Don't look at me.

The word for host in the original Hebrew here is "tzava".   It shares its root with  the following:  "To fight, do battle, to serve in the temple guard, assemble, perform service for the LORD, to desire, long for God and His victory, host of the Almighty, with focus on great power to conquer and rule" and finally it can very rarely mean "appointed time". I believe David knew it was the LORD's appointed time to show Himself against Goliath.

And the Hebrew word for "armies" used here is: "ma-a-racha". It even sounds like a battle cry!  It means: "arranged in rows, in proper ordered place."

This "ordering" of Heavenly hosts of armies  is beautifully illustrated in  another well known  account of doing battle in 2 Kings 6:

Awesome! Elisha was arguably  the very first Mossad agent.  He received his information direct from God. This is not uncommon when we serve a loving God, Who wants the very best for us. He desires  to achieve the most through us  for the glory of His Name. He also doesn't want us to be fooled, so He gives us  information on those around us and with whom we are connecting, through prayer and discernment.  This discernment involves key revelation on who is good to trust and draw close to and who to avoid and pull away from.

“Go, find out where he (Elisha) is,” the king ordered, “so I can send men and capture him.” The report came back: “He is in Dothan.” Then he (Aram) sent horses and chariots and a strong force there. They went by night and surrounded the city.  When the servant of the man of God got up and went out early the next morning, an army with horses and chariots had surrounded the city. “Oh no, my lord! What shall we do?” the servant asked.

“Don’t be afraid,” the prophet answered. “Those who are with us are more than those who are with them.”   And Elisha prayed, “Open his eyes, Lord, so that he may see.” Then the Lord opened the servant’s eyes, and he looked and saw the hills full of horses and chariots of fire all around Elisha.   As the enemy came down toward him, Elisha prayed to the Lord, “Strike this army with blindness.” So he struck them with blindness, as Elisha had asked."

1)    The God of Israel gives us inside information into His enemies, into those who are arrogantly trying to hurt the ones God loves.  And He does this  in such a way as to undermine the  ranks of the enemy, as they become convinced there must be a spy among them. "Who told you? How did you know we said that?"   We really need inside information sometimes in life, to push into what God has for us or to walk away from a situation.

When we try to live discerning lives, loving lives full of His Holiness, His Word and His Prayers, He will start giving us what we need to make the most excellent choices. These   choices are often not just for our benefit and blessing, but for others too. Occasionally, this Holy revelational information will enable us to walk in obedience and trust into projects and relationships  which we wouldn't have been able to move without Him "opening our eyes".  If you need to make a choice, ask the LORD for clear information about the right people to work with,  keep close to and when to move into a job or venture in His timing. I have learned when I spend more time with Him, when I surrender my actions, and especially self defences, to Him, He gives me the strategy I need, each day and night.   It usually  amazes me and is beyond anything I could have ever figured out myself.

2)  The second reason the LORD inspires me in this passage is that there was a sudden divine swap of blindness.  The blindness to God's armies  in the servant of Elisha was transferred through righteous prayer onto the other side, onto the enemies of the God of Israel,  the arrogant.  Firstly, Elisha's servant was spiritually blind but then he could spiritually see.  Next the enemies of God became physically blind.  I wonder if any of them, through this humiliation, then gained their spiritual sight, in seeing that God is real and is  fighting for His people? Occasionally, arrogance is humbled but it is rare.  I pray many of God's enemies of His People (Christians and Jews) today have the same reaction to the victory He always gives His Own.   God opens eyes.  But He closes them too.  I love remembering this is how Elisha prayed. There are things we need to see to which we are  currently blind.  The exposure of what is  really there spiritually is often a prayer away, either in seeing our enemies expose their motives or seeing God's Truth become so obvious we are happily floored.

3) There were two armies; one against the God of Israel vs. one  Heavenly army for the King of Israel.  Both were in ordered rows.  The world, and evil, can look efficient, ordered and strategic against the man, woman or purposes of God.  The United Nations sits in ordered rows passing resolution after resolution arrogantly against Israel. It is arrogant when it is against God's Word.   There are many facts and figures that can be easily found online regarding the UN's bias against Israel but here are just a few:  "The figures are clear: between 2006 and 2013, Israel was condemned in 45 of the general resolutions, almost as many as the other 192 countries together. Next on the list was Myanmar with 10 resolutions against it. Israel was also condemned in 46% of resolutions devoted to specific countries; of the 12 emergency “special sessions” 2006-2009 relating to specific country situations, six were on Israel. All these resolutions were initiated by Arab states.  The financial figures are equally instructive. In the year 2013 the financial amount UNHRC spent on Middle East countries showed the bias. It spent $367 million on Jordan, $362 million on Lebanon, $316 million on Syria, $ 293 million on Iraq, and $3 million on Israel." For more on this please visit this factual article by The Commentor, or just explore the web.

In addition, the liberal media misrepresents Israel. Replacement theology in the church excludes Israel. But the LORD so often encourages me  not to be  fooled by what my physical eyes see.  He encourages me not to focus on the  face-value appearance of any circumstance or opposition. If we are the LORD's, and are behaving like it, any opposition or obstacle is imminently going to be over-run by God's holy angel warriors.  We can ask for spiritual sight to overlay our  physical sight. I don't actually know what I would do without this gift from the LORD.   It is now like a daily briefing  I need, to live right and in peace with Him.  Please pray for the Jewish people in Israel and around the world, and for Christians who love and support them, that we will together know that the God of Israel is fighting for and protecting us, giving us all the strength we need and blinding and confusing His enemies.

Also, interestingly, the Hebrew word used in this account for King Aram's armies is different to David's and Elisha's.  This word is "chayil" which means: "strength, capability, skill, power, band of men".   All of these are human attributes which, no matter how strong, cannot stand against the strength of the LORD.  By comparison, Elisha's "army" in the Hebrew is simply the awe-inspiring phrase: "horses and chariots of fire!"

So, to sum up this account, there is a strong, capable, skilled, powerful band of men vs. the LORD's horses and chariots of fire.       I'm not unaware of the intense pain some of life's battles cause our hearts when I also state that  in these terms, it is not much of a contest.  Some in the world have the illusion of power. But the important question is "Who has the Godly authority"?  For example, Pontius Pilate had the human power. But Jesus/Yeshua stood before him silently and had all the authority.  I pray I will always be able to instantly spot the difference and fill my life with people who have the authority and strength of Jesus/Yeshua in them, not a lust for human control and power.

So if we are a  believer in the God of Abraham, Isaac and Jacob (Avraham, Yitzchak and Ya'akov) and the LORD Yeshua/Jesus, and a challenge, band of men, or a Goliath come against us,  He is  encouraging us through His Hebrew to:

If you're anything like me the LORD has to repeat this to me, sometimes loudly, sometimes softly, for me to trust in Him.

So, in our lives, positions, ministries and  battlefields, are we  battle-ready? Are we praying like Elisha and positioning ourselves humbly like David?    I pray  He gives me more faith (emunah) to trust in the One True Rock, my LORD and Saviour, to defeat the  external voices of any and all  goliaths in my life, and especially  in the lives of those I love, through Him. 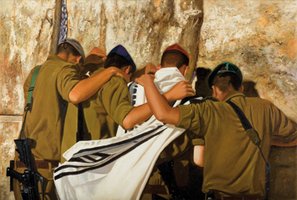 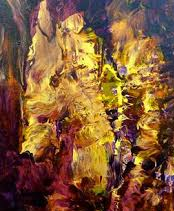