I have read the account of Jacob's/Ya'akov's dream many times. But, one day,  I asked the LORD, "Where is the Messiah in this story?"

"Jacob left Beersheba and went toward Haran.  He came to a certain place and stayed the night there, because the sun had gone down. He took one of the stones there and put it under his head for a pillow.  And he had a dream. He saw steps going up from the earth to heaven. He saw the angels of God going up and down these steps.  And he saw the Lord standing above them. He said, “I am the LORD, the God of your father Abraham, and the God of Isaac. I will give to you and your children after you the land where you are lying.  They will be like the dust of the earth. You will spread out to the west and the east and the north and the south. Good will come to all the families of the earth because of you and your children.  See, I am with you. I will care for you everywhere you go. And I will bring you again to this land. For I will not leave you until I have done all the things I promised you.”  Then Jacob awoke from his sleep and said, “For sure the Lord is in this place and I did not know it.” And he was afraid and said, “How awesome is this place! This is none other than the house of God, and this is the gate of heaven.”  So Jacob got up early in the morning. He took the stone he had used as a pillow, and set it up as a pillar. He poured oil on the top of it.  He gave that place the name Bethel."

The Holy Spirit then showed me the following, verse by verse:

"Then Jacob awoke from his sleep." In the end days the Jewish people will awake from their slumber and see the Rock on Whom they have been sleeping and resting their heads.  We believe this Rock is Jesus/Yeshua. The Hebrew word for "stone" - on which Jacob/Ya'akov laid his head - is quite literally made from the Hebrew words  for Father and Son.

If you ask a non-Messianic Jew what this fact means, they will usually say it represents God's desire for us to pass on the knowledge of the God of Abraham, Isaac and Jacob from father to son. This is also one of the reasons why the Jewish people lay a small stone on a grave.   It is a moving act of saying "Your memory will be passed down through the generations, we will not forget you."

But, through the Holy Spirit, we can see the even deeper meaning, that in the Stone is hidden the Messiah, the Son of God, with the Father:  "Therefore, the Lord God says: Look! I’m laying in Zion a stone,     a tested stone, a valuable cornerstone,     a sure foundation:     the one who trusts won’t tremble." (Isaiah/Yeshayahu 28.16)

"And said, 'Surely the LORD is in this place and I did not know it."  Jacob was in an area called Haran which means "Mountain Sanctuary." With a name like that, he knew the LORD must have been there.  So, what didn't he know, that he then saw prophetically, when heaven opened?

"And he was afraid and said, 'How awesome is this place! This is none other than the house of God, and this is the gate of heaven!"  Who calls Himself the Gate through which we enter Heaven?  (John 10.9) In addition, Jacob/Ya'akov calls this place "awesome." To be in awe means to be in Holy fear and respect of the LORD.  The word for "house" here in Hebrew is the same as the word for "home".  So "house of God" means "home of God."  This speaks of an intimate family place, at the same time as being in Holy awe; the perfect description of our relationship with the One true God through Jesus/Yeshua the Messiah.

"Then Jacob rose early in the morning, and took the stone that he had put at his head, set it up as a pillar, and poured oil on top of it."  He anointed the Stone with Oil.  As we've seen from the Hebraic understanding of Oil, this is like saying "This Stone is King, the Messiah,  the seed but with death before life, the healing now and in heaven, our lamp oil and light.  I am preparing to meet a King and, as a tiny tabernacle of His Spirit, am anointed by God to make me holy."

Then, after reading and studying Jacob's dream in Genesis 28, the LORD told me to read forward seven chapters (seven represents completion in the Bible) to Genesis 35. This is what I found:

"Then God said to Jacob, 'Go up to Bethel and settle there, and build an altar there to God, who appeared to you." (Genesis 35.1)  God told Jacob/Ya'akov to go back to where he had the dream and build an altar to the LORD to worship Him. Jacob anointed this altar with Oil. When he built the altar, the first stone he used would be called the  Cornerstone.  The Messiah is called the Cornerstone in both the Old Testament/Tanakh and the New Testament in Isaiah/Yeshayahu 28.16 and  then again in Ephesians 2.19-22: "Now, therefore, you are no longer strangers and foreigners, but fellow citizens with the saints and members of the household of God,  having been built on the foundation of the apostles and prophets, Jesus Christ Himself being the chief cornerstone,  in whom the whole building, being fitted together, grows into a holy temple in the Lord,  in whom you also are being built together for a dwelling place of God in the Spirit."

So, the account of  Jacob's/Ya'akov's dream, and the altar he returns to build with the same stones, are full of  Messianic meaning. It is a prophecy of Jesus/Yeshua hidden in the stone upon which he slept, and the waking of the Jewish people to recognise the One Anointed with Oil.  The Hebrew word for Messiah - Mashiach - literally means "One Anointed with Olive Oil." This is  exactly what Jacob/Ya'akov did to the stone, and the altar  at Bethel, after  he dreamt that   heaven came down to earth.

May this understanding continue to heal the church of a Greek mindset, which sometimes believes that Jesus/Yeshua is only found in the New Testament.  This mistaken belief brings division to our own minds, as well as between the church and the Jewish people, the two halves of God's heart.  May the LORD bring us into more Hebraic understanding of Who Jesus/Yeshua is, the Messiah of Israel, hidden in the Hebrew. 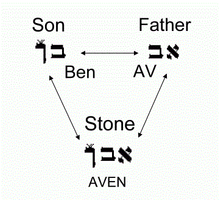