Psalm 125 says: "They who trust in the LORD shall be like Mount Zion;

it is not shaken; it remains forever."

Whatever language we're reading that in, stop and ponder what an awesome promise that is.  He is saying that if we trust in Him we will be like Mount Zion! Mount Zion is eternal  and it cannot be shaken.

But, I'd love to show a little more of what is hidden in the Hebrew.

This is really important to our faith and end-time prophetic understanding. That is because the verb for "ascents" in the Hebrew is identical to the verb for "aliyah".  This Psalm is a song for those who will "go up" - both to Jerusalem in the natural and finally in the spiritual to Heaven.  Many Psalms begin this way, so all of the Psalms listed in English as "a song of ascents" can also be read this way.

Secondly, the word for song in Hebrew in this Psalm is "shir."  This means: "triumphal song, a fresh outburst, especially a religious song, a Levitical  song accompanied by music, and especially joyous, not for sorrow." (Brown-Driver-Briggs Biblical Hebrew)  That sounds just like a bridal shout of joy to me!

Thirdly, the Hebrew word for "shaken" in Psalm 125 is also key.  It is the identical verb to the one found in Isaiah 24, when the LORD tells us that in the end days "The earth is utterly broken down, the earth is clean dissolved, the earth is moved exceedingly." (Isaiah / Yeshayahu 24.19)

In English Bibles this verse says "moved exceedingly." But in Hebrew this word for "moved" is exactly the same as the word for "shaken" in Psalm 125! It can also mean: "falter, slip, fall, totter." So, those of us who trust in the LORD will not therefore go through this end of earth-tottering, because Psalm 125 specifically says that those who trust in the LORD will be as Mount Zion which cannot be shaken! While the earth is being moved exceedingly, we will be safely lifted up and will be as firm as Mount Zion in the heavenly Jerusalem.

I believe God is saying if we trust in Him we will not be shaken so much by the difficult events in our lives. But also, I believe it's a prophetic promise that those who trust in Him in the end times will "go up" (aliyah) to be spared a final world-shaking.

Fourthly, what does it mean to be like Mount Zion? Again, God makes it so easy for us to understand because in the next verse He describes what it's like: "The mountains are all around Jerusalem; and Jerusalem is all around His people." (Psalm 125.2)

I'm sure this is why those in the church who show  anti-Semitic views towards the Jewish people, or who just can't be bothered to care for Jewish people because it's uncomfortable, are not blessed and favoured to the extent that those  who do are.     These are not my words but God's in Genesis 12.3.

I have some treasured friends who I know God has used to literally surround me, in prayer, blessings and protection of one sort or another, just like mountains around me.

Lastly, I believe Psalm 125 is telling us that those blessings will be eternal. That's because in verse two the LORD describes these mountains around Jerusalem and His people are "from this time and forever."

In Hebrew this is the phrase "ad olam."  It's a well known phrase in many verses and Hebrew prayers and is more accurately translated as "as far as eternity" or "until perpetuity."

How beautiful is that?! I love the thought of those who bring me such comfort as a Jewish believer in Yeshua will be like Mount Zion as far as eternity!  What a reward, what a blessing!

We all have things we're struggling with or which are causing us pain and challenges. Having said that, although I often pray for people's pain to be removed, I don't believe all pain is bad. Sometimes it has to happen to clean our soul and spirit because God loves the health of our soul even more than the health of this life.

Hang on in there dear friends.   Be like the mountains around Jerusalem. Have a mountain of trust in the LORD.  Then, when the final shaking comes, we will go up with Him into Heaven and not be shaken. 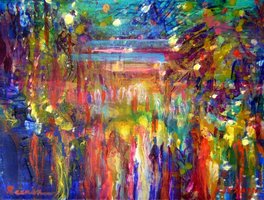