Does the LORD ever show you something in His Word that shifts your theology?  Recently, He asked me to read Psalm/Tehillim 22.   I was stopped by Him at verse one. In English it is a very well-known verse:

My God, My God, why have You forsaken Me?

It is well-known because Yeshua quotes this verse from this Psalm as He is physically dying on the cross. Then, as I studied, I heard His Voice: "Look closer at My cries."  I looked in the Hebrew and immediately noticed the word for cry used here  is not the  word I was used to.   I looked it up to be sure and was floored. This verse in Hebrew actually says:

My God, My God,  why have You forsaken Me?

And art far from the words of My roaring?"

Amazingly, of the 26 times this verb is used in the Hebrew scriptures,  at least 14 times it actually refers specifically to a lion roaring. Of the other times it refers to either the LORD roaring, a sound like thunder or many waters, the sea roaring or a battle cry.  It is a mighty sound, that upsets the natural order of things. This is not a gentle weeping on the cross but a roar of strength.

I don't understand why the original translators in this one instance translated it as "cry."  But in the Hebrew, it is like a hidden gem the size of a mountain!  It is a prophecy; the Lion of the Tribe of Judah is roaring from the cross.

To begin to put the strength of this Hebrew verb in context, here it is being used in Joel 4 verses 15 - 16:

"The sun and the moon became black, and the stars withdraw their shining

And the LORD shall roar from Zion

and utter His Voice from Jerusalem,

and the heavens and the earth shall shake;

but the LORD will be a refuge unto His people Israel,

and a stronghold to the children of Israel."

To me, it seems the prophet Joel is referring to the moment that Messiah Yeshua will be on the cross.  This is because, as Yeshua gave up His life for us, we know that His Word says the sky went dark and there was an earthquake.   (Matthew 27. 45 & 54)  And hidden in the Hebrew language,  Joel - being a prophet - uses the exact same verb for roaring that Yeshua then quotes  from King David, at the exact moment He gives up His life for our sins.    That is not a coincidence.

So, is this Roaring Lion of the Tribe of Judah how we have traditionally seen Jesus on the Cross?  Is this the meek and mild Saviour suffering for us? Or does our theology shift just a little deeper  with the Hebraic truth? He is a suffering servant but - at the very same time - He is the Lion of the Tribe of Judah ROARING from Jerusalem over His people Israel and promising, in that roar, to be a refuge for His people; a stronghold to the  future generations of the children of Israel.  As a direct descendent of those children of Israel, this makes me feel the terrifying safety found in hiding under His Lion's Mane.

I pray the original Hebrew will this  help set free the thinking of those under the "strong delusion" of replacement theology and "modern churchanity."   The LORD Yeshua/Jesus - the Lion of the Tribe of Judah - and the LORD  God of Israel is  One. (Deuteronomy/Devarim 6.4 and John/Yonatan  1.1)

This Hebrew verb for roar appears again in Jeremiah/Yirme'yahu 25, extracts from verse 30 - 32:

"Therefore prophesy thou against them all these words, and say unto them: The LORD doth roar from on high, and utter His voice from His holy habitation; He doth mightily roar because of His fold; He giveth a shout, as they that tread the grapes, against all the inhabitants of the earth.  A noise is come even to the end of the earth; for the LORD hath a controversy with the nations, He doth plead with all flesh; ...   and a great storm shall be raised up from the uttermost parts of the earth."

In Hebrew, "He doth mightily roar because of His fold" literally reads "Roaring, He roars over His fold/dwelling place."  The word for dwelling place in Hebrew here literally means: house, habitation, fold, dwelling place, stable, pleasant land, pasture, a place of rest and peace. This definition sums up both the Land of Israel, Jerusalem on earth and in heaven and the Messiah's mission on earth. This Hebrew verb even hides within itself the way He was born - in a stable - and what His sacrificial death will give us - a place of rest and peace in God's holy habitation.  No wonder He roared it from the cross. But here is a mystery; how did King David know to write this exact verb in his Psalm, left waiting through time for the eternal King of Israel to quote it centuries later? Hebrew is full of revelations from Heaven.

"For the LORD hath chosen Zion; He hath desired it for His habitation:  This is My resting-place for ever; here will I dwell; for I have desired it.  I will abundantly bless her provision; I will give her needy bread in plenty. Her priests also will I clothe with salvation; and her saints shall shout aloud for joy.  There will I make a horn to shoot up unto David, there have I ordered a lamp for Mine anointed.  His enemies will  I clothe with shame; but upon Himself shall His crown shine."  (Psalm/Tehillim 132. 13-18)

No wonder the world powers are trying to tear apart and hurt Jerusalem and the Jewish people, wherever they find us. But they will not ultimately succeed. The LORD's loving intercessors can hear the Lion of the Tribe of Judah roaring over Jerusalem and His people Israel.      How can  that same  Lion, roaring from the cross, ever forget Jerusalem and the children of Israel?  The Hebrew proves He cannot.  He will also protect all who come to Him for salvation under His mane as the LORD God of Israel, the LORD Yeshua, from every nation, tongue and tribe.     Thank you LORD. 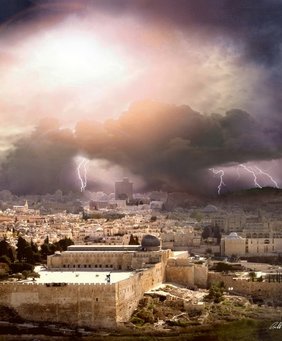