The Bride and the Secret Place: Part One

Increasingly,  the LORD has been bringing to my attention a long-standing theme between the two of us - the "Secret Place".  This has been a place, both spiritually and physically, in which He has delighted to hide me, for many years.  Recently, I noticed - while talking separately with four Christian friends - that they also each brought up the theme of the "Secret Place" - out of the blue.  Interestingly, none of them know each other or live near each other; one even lives overseas.

At any one time, I have several studies waiting to go up on this website, from time alone with Him in His Word through His Spirit.  So, what stood out, regarding all four friends mentioning this phrase over the course of a few weeks, was that I'd made some notes several months ago about the "Secret Place" from the Hebrew, which the LORD had shown me and which had surprised me with new discoveries I'd not seen before.

But I had never felt prompted to put those notes up here; maybe because the LORD has first been getting me more into shape by dwelling deeper in His Secret Place myself. While I listened to each friend explain their God-given desire to go more into this "Secret Place" with God, I knew He was asking me to at some point bring this teaching out into the open.  It is a strong word; full of His love.  I pray it blesses us, challenges us and brings us all closer to the LORD of our eternal souls.

So, how do we get to this "Secret Place" and what exactly is it?  As always, the answers lie in His Word, and especially in the treasure He hides for us to find in the Hebrew.

When we think of the "Secret Place" as believers in Yeshua, many of us probably think of the very well known first  verse of Psalm 91. It is one of the most famous verses to read and believe in times of turmoil; whether that turmoil is personal or through witnessing difficult international events.  The first verse of Psalm 91 states:

"He who dwells in the secret place of the most High shall abide in the shadow of the Almighty."

But what does that actually mean to each of us?  What preconceptions might we have - in our mainly non-Hebraic and modern church culture - in understanding the word "secret"?

In the first century church - which was mostly Jewish - and in the persecuted church around the globe today, secrecy saves lives; both spiritually and physically.  Throughout history, secrecy is something that the Jewish community instinctively understands, wherever we find ourselves scattered in the Diaspora.  Never has this also been more acutely understood by those of the Christian faith, who love and support the Jewish people, than in this time of rising global antisemitism.

But sadly, in the modern and increasingly apostate church, the idea of secrecy has been coloured with a slightly negative connotation, even though the LORD talks about it so positively. I believe the root cause of this is spiritual and falls into the following categories of sin, which break my heart to list. I came to write this list through much time alone "shut away" with Him, in His Word and in prayer:

Obedience to the Word of God, by definition, will cause disunity through God dividing the Holy from the unholy.  In the Jewish and Messianic faith we even have a weekly ceremony for this holy separation at the end of Shabbat. It's called Havdalah, which literally means "separation"! While lighting the candle and drinking the wine we state the Biblical truth that God Himself separates us as a holy people. (Deuteronomy/Devarim 7.6, 2 Corinthians 6.17,  Matthew/Mattityahu 22.14, Hebrews 10.10, Psalm/Tehillim 4.3 to name a few, with the most well known probably being Romans 1.1 when Paul, the Jewish apostle to the early  church, calls himself "set apart for the gospel of God.")

All the above sin will stop us entering into the Secret Place with the LORD because all contradict the Word of God and His specific instructions to us throughout the Bible. Tragically, because of diluted Bible teaching, much modern Christianity is far from the purity that is forged through persecution. Therefore being secret and careful is sometimes misinterpreted as being aloof and elitist. But to those Christians, and Jews, who have been through persecution it is instead seen as a loving protection of the body of Christ and self-sacrificial, in that they are not thinking how being guarded will affect their social reputation.  It's interesting to note that this is exactly how the Jewish people are often misinterpreted.  The One New Man of Jew and Christian together will suffer much of the same pain from both the world and the apostate church.

So, it is clear that the path into this treasured Secret Place is a narrow and costly one to our fleshly nature, because in order to get into it we must leave our flesh behind.

One of my favourite accounts of being inspired by persecuted followers of Yeshua in the Secret Place, and the sheer cost of it, is from an underground church in China.  One night some years ago, while a small church was meeting in a room in secret, a local armed police chief burst in with some of his men. Everyone froze as he begun to walk between the Christians shouting in their faces, "Deny Christ and we will not shoot you. We will forget we ever saw you here if you leave now and never come back." Several ran out immediately. Then he walked around the diminished group, waving his gun. Again, he shouted, "Last chance, never come here again and I'll spare your life."  A few more ran out.  When no one else would leave, even at the threat of death, he locked the doors of escape and turned to the now very, very small group of remaining Christians.  Then he put his gun away, and begun to speak softly and quietly; "I too am a Christian, so are these few of my men. Now you know who you can trust with your life. As your new police chief, I want to keep you safe and protect you. All those that would betray you to the authorities for their own lives have now left. You are very few but you are the ones who would have died for each other and for Christ."

Are we thankful when the LORD redeems testing and painful times that thin out those in our lives?  Don't you think He's simply allowing us to see who we can trust and who will crumble under pressure? What overcoming love, gained sometimes through tears! He's showing us who will really protect and hide us in the coming times of trouble, at often great cost to themselves.  Those rare Christians that hid Jews during the Holocaust are called the "Righteous Among the Nations" for good reason. It is righteous to lay down our life for a friend (John 15.13-14) but it is rare. Will we, as believers, love Christ, Israel and our local Jewish community, even when we are insulted, sometimes even by those in the church? But isn't that how most Jewish people have felt most of the time through history?! And it's fair to say that being Jewish has gotten a whole lot harder recently! As a Messianic Jew I usually hide two parts of who God made me to be; my  Jewishness from the gentile Hellenistic church-world and my belief in Yeshua from the orthodox Jewish world. We are often Esthers, hiding who we really are, until the right moments, for the greater good. Being hidden and secret is noticeably more understood by many of the Messianic believers I know. I guess it's in our D.N.A. Even after years in the Diaspora, our God-given heritage finds us out and lovingly challenges us.  False unity is called a very specific word in the Jewish community; it's called "assimilation" and it's considered a grave weakness.  It means compromising with the world around you in order to fit in and the 21st century apostate church is very good at it.  The LORD said, "Be in the world but not of the world" i.e. Don't assimilate! (John/Yonatan 17.16)  But if the world comes right into the church, where else is there to go to find Him but deeper into the Secret Place?

Most Jewish people have direct historical experience of hiding in secret places and may almost certainly again.  At some point, Christian believers will also catch up to the level of secrecy and protection required to truly guard and love one another, both spiritually and physically, just as the first church did.  As a Messianic Jew hidden among Christians in the Diaspora, I am very grateful to those believers who at present love, understand and guard me and those I love this way.

So, avoiding these sins listed above, and repenting of them quickly when we may fall, helps us get into the Secret Place of the LORD. It is not easy to get into the Secret Place. It is not always a romantic get-away! It is death to self.  All of this can only be achieved through depending on and asking for His Holy Spirit to help us to become more like Him according to His Written Word.  But the joy found in dying to ourselves and finding more of Yeshua is better than the very best of life on earth.

Click here or in the right hand column of teaching to go to Part Two of The Bride and the Secret Place.. 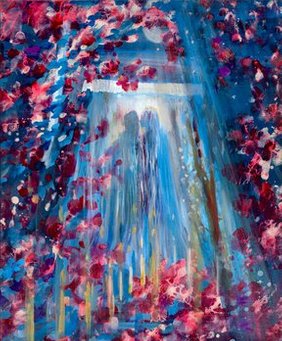