The Promises of God

There is no simple word for "promise", as we understand it in the English, in the  Hebrew Bible.  Instead the LORD uses several words, building on their shared Hebrew root-words. The first word is:

Davar:  It means: "to say, to speak, tell, any part or unit of speech such as a clause or whole sentence, command, promise, to speak together, appoint, declare, pronounce, destroy, subdue, commune, entreat."  This shows us immediately how powerful GOD's word (davar) is - it can appoint people, declare irreversible truth, subdue and destroy evil - all in one word.

Sometimes, as believers, we struggle to grab hold of something as abstract as a promise or word God has said to us.  After all, in our world, words and even promises can be broken, sometimes as easily as speaking them.     But in Hebrew, the word  "davar" is exactly the same as another Hebrew root word, except for one small change in the vowel marks underneath the  root letters.    This change to the word 'davar' in Hebrew does not affect the core root letters but changes just one Hebrew vowel for 'a' for another Hebrew vowel for 'a'! So in English it even looks exactly the same!  This second word is translated again as:

Davar:  In Hebrew it means:  "matter, any event, thing, any object, duty required, commandment, every thing."

So GOD's promises and his words are, in His eyes, as solid as objects.   They are as solid as a thing - the chair you are sitting on for example. A promise or word from God  is as solid, in His eyes, as every step I take on the solid ground beneath my feet.  So, if I want to see His words the same way He does, I'll stop my doubting and walk forward on the words He says to me.   By the words from His mouth He created the universe.  By them He makes 'promises' which are as solid as  solid matter.

This Hebrew word can be changed subtly again into four more words by changing the vowel marks - while the root letters stay the same.    These words are all therefore related in a  Hebrew 'word-family'.  All meanings, whether or not apparent in an English translation, are therefore intimately connected in GOD's original language.  These further words are:

Dover -   it means: "pasture, in a remote place, fold".  Jesus/Yeshua regularly refers to Himself as our Shepherd and to us as His sheep.  He refers to Israel as His sheep many times (for example in Genesis 29).  Jesus/Yeshua often goes off to pray in a remote place.  Ever felt like you needed just a quiet space or a favourite open place in which you love to relax?  'Dover' is therefore the same root word  as the Hebrew word for  "Word" and "Everything that was created."  So, when the LORD tells us that Jesus/Yeshua goes off to a remote place to pray, in the Hebrew it is like reading that He goes off into  Himself. This is because the Hebrew for Remote Place and the Hebrew for The Word (davar) are the same root! And we know that Jesus/Yeshua is called The Word because John 1. 1-4 describes Him precisely this way.     In Hebrew, He is hidden in plain sight as the Messiah, even through how He chooses to pray!

This is made even more clear in the Hebrew by the next connected word "dibber".  The letter 'v' and the letter 'b' in Hebrew are the same, except for one dot in the middle.  Also, to double a letter you just add a tiny dot.   So the Hebrew root word for "davar" and "dibber" is the same.   This connected word quite literally means 'the Word of God'.  So in Hebrew the word for "promise,  commandment and everything created" is the same root word as 'the Word of God.'   Who does God call the Living Word of God? Jesus!  So He is  the same root word in Hebrew as the words for "Promise", "Commandment" and "Everything".  Sounds like the fulfilment of the prophecies of Messiah to me.

Change the vowel marks in the word davar once again and the word becomes "d'veer", which means:  "Inner Sanctuary, referring to the Most Holy Place."   Isn't diving into Hebrew just  beautiful? Jesus/Yeshua is our Most Holy Place, the High Priest (Cohen Gadol) Who went eternally into the Inner Sanctuary, to cleanse and redeem us from our sins as both the Priest and the Sacrifice (Korban Pesach/Passover Lamb).    He is our most perfect Promise, more solid than anything that was created by Him.  You can stand on His Word firmer than you can stand on the floor - because one day the floor won't be there, but He always will, whether you believe in Him or not.

The fourth connected word to the Hebrew for "Promise" is not so comfortable to read.  It is the word "dever".  This means: "plague, pandemic, thorn, sickness".    In Hebrew, two words can share the same root and hold  opposite meanings to each other, almost to point out to us that good and evil are often divided by a very small choice.  Deception is only capable of deceiving if it looks almost exactly like the real thing, after all. We often choose to forget that the Word of God 'promises' both good and bad outcomes from our choices in life.  GOD doesn't desire it at all.  But, because He is Holy, He is a perfect carer and lets us know in advance what will happen if we step outside His goodness.  Every good psychologist knows that if every choice  is  'ok' to a child, that  child will grow up insecure and confused.  Boundaries show our value.   If only we knew more  of this as believers the bride would be holier.  He so desires  His Bride to be  ready.

So  we have the word 'promise' in the English translations of the Bible.  But in Hebrew we have the words:  "Promise, Word, Word of God, commandment,  things, matter, remote place, inner sanctuary, Most Holy Place, and  thorn, plague and sickness" all intimately living together in the Hebrew in the same word-family.

In English, we tend to search the scriptures for His specific promises.  In Hebrew  a Promise of God is by definition every time He speaks!   This understanding deepens my awe, trust and knowledge of His will as I read  His Bible and listen to His Voice.  And it makes finding GOD's promises a lot easier!

Davar is used to mean promises over forty times in the Hebrew Scriptures (Old Testament).  But the LORD interestingly uses another word for "promise" just six times:  This rarer word is "Omer".  It is connected to the Hebrew verb "to say" and again can mean  "promise, said, thing."  It is found for example when GOD speaks to Noah and "promises never to cover the earth  again with water" (Genesis 9).

But here is where it gets almost too beautiful to grasp.  The Hebrew word "Omer" shares its root with the Hebrew word 'Immar'.  Remember to change a vowel and double a letter you just move the vowel dot/add a doubling dot.  One dot, like a full stop. So, in Hebrew, these two words share the identical root word making them so  intimately connected in God's "word-family". Before writing what 'immar' means, let's  look at the six places the LORD uses it and the central cry of God's heart in each:

1)  King David says in Psalm 77.8:  Is His Mercy gone forever? Has His Word  (omer) failed for all generations?  (AN, AS YET, UNFULFILLED, MERCIFUL GENERATIONAL PROMISE  YEARNED FOR BY KING DAVID).

2)  Numbers 14.40: And they rose up early in the morning and went up to the top of the mountain, saying (omer), "Behold, we are here and we will go up to the place which Adonai YHVH has said, for we have sinned.”  (MOUNT SINAI / A PRE-ECHO OF THE  FUTURE GOING UP TO MOUNT ZION TO ATONE FOR SIN).

3) & 4)  Kings 8: 19 and 2 Chronicles 21.7:    And YHVH was not willing to destroy Judah (the Jewish people) for His servant David’s sake, as He had said (omer) to give him a lamp to his sons forever. (A PROMISE OF AN ETERNAL  DAVIDIC LIGHT AND FUTURE ETERNAL REIGN OF A SON OF DAVID).

5)  Nehemiah 9.23:   You also multiplied their sons like the stars of the heavens, and brought them into the land which You had promised (omer) to their fathers, that they should go in and possess it.  (PROMISE OF THE MULTIPLICATION OF THE JEWISH PEOPLE AND PROMISE OF THE LAND OF ISRAEL, AS ONE PROMISE).

6)   Esther 4.7:  And Mordecai told him of all that had happened to him and of the sum of the silver which Haman had said (omer) to weigh into the king’s treasuries for the Jews in order to destroy them.  (A FALSE-PROMISE BY THE ANTI-CHRIST SPIRIT IN EVERY GENERATION FROM HAMAN, HITLER, IRAN & ISIS, TO DESTROY THE JEWISH PEOPLE WHICH IS OVERTURNED BY THE GREATER PROMISE OF  GOD).

In each of these Hebraic heart-cries of the LORD , He uses the word 'omer' which is  the same root word as 'immar' in Hebrew. So why does the LORD use  this word for 'promise' here, rather than 'davar'?  The breath-taking answer is in the meaning of the word  'immar'.  What does it mean?

Who is the answer to all these cries? Who is the Male Lamb hidden inside the Hebrew letters all through these promises in the Hebrew Scriptures?  Who is the perfect Passover Lamb?

Jesus/Yeshua is the WORD, OBJECT, MALE LAMB AND  HIDDEN PROMISE OF THE JEWISH MESSIAH.  In the Hebrew He is there, hidden in plain sight:

A modern-day church that separates even one of these promises  of God from the other, is separating  the 'word-family' of the Living God.

Haman pays silver coins into the king's treasuries to destroy the Jewish people.  Yeshua  allowed Himself to be sacrificed for silver coins to save the Jewish people.  And where did Judas throw the silver coins just before he killed himself for betraying the Son of GOD?  Into the Temple - the King of King's treasuries (Matthew 27.5),   just like his predecessor Haman who  paid silver coins into the king's treasuries.  Both Judas and Haman went from the one who thought they were in control of the betrayal to totally losing their position next to the King and being hanged within 24 hours. The LORD is the God of turned-tables! And why silver coins?   In Leviticus, the price of redeeming a person is always given by the LORD  in silver coins (Leviticus 27).  Yeshua, being Jewish and knowing His Tanakh, knew this.  He is fully man and fully God, a total mystery to our human minds.  So, as God, He was even in control  of the currency  being bartered by humans for His  sacrificial death.

From this it becomes very easy to see that Replacement Theology (the false  view that the church has replaced Israel) is just like the 'haman'  spirit. The 'haman' spirit in each generation - what the Bible also calls the anti-christ spirit - seeks to:

•  Destroy the church's eternal rewards by  fooling the church  into not taking  the Jewish Messiah back to His own Jewish people.  The 'anti-christ' spirit has done a fairly successful job of making Jesus/Yeshua look so Greek, few Jewish seekers would recognise Him as the Jewish Messiah.  His Holy Spirit is   changing  this though.  There is a gentle, strong move of His Holy Spirit in the true Bride, yearning to discover her Hebraic roots and yearning to learn how to love the Jewish people in a way that she can recognise. 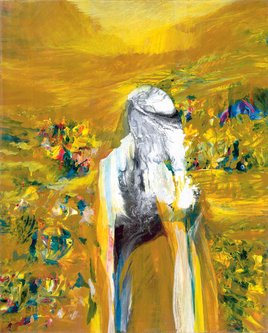