The Tree of Life

This teaching was recorded at 'Bethel Gathering' - a UK Messianic Church - on 15.06.19.  To listen to the Teaching Audio click here.

Written notes to the audio teaching are also available below:

"I pray, as always that the Holy Spirit helps each and all of us hear how to apply this wonderfully encouraging teaching from the LORD, the God of Israel, the LORD Yeshua, through understanding more of the Hebrew together.

This teaching is called something in English with which we are all familiar - The Tree of Life:

When I say that the first thing that comes to our minds is probably the Garden of Eden in Genesis.  It is true that this is the first place that this phrase “the tree of life” occurs in the Holy Scriptures.  It actually also only appears in two other books of the Bible – Revelation and Proverbs.

We’re going to read those together now:

Genesis 2: 8- 9 “The LORD God planted a garden towards the east, in Eden; and there He placed the man whom He had formed. Out of the ground the LORD God caused to grow every tree that is pleasing to the sight and good for food; the tree of life also in the midst of the garden, and the tree of knowledge of good and evil.”

So, this verse in Genesis, where this mystery Tree of Life is first introduced to us as such, is a Tree that is listed FIRST, is described as a BRANCH by God, is placed in the MIDST of the garden, to somehow compensate for the sin the humans are about to consume from the other opposing tree.

I would suggest that even in this ONE line we can see through the Hebrew that Yeshua waiting in perfect placement, intricately woven into the historical account BEFORE the pride of sin was even taken. We took sin into our inmost parts from the tree of good and evil. So, the tree of life as an antidote to our sin, was planted in the midst of the garden to show a redemptive mirroring, and that tree was the Branch, the Sprouting up of Messiah.

Who knew studying Hebrew could secure us so much deeper wisdom and understanding?

The 2nd place the Tree of Life is mentioned is shortly afterwards in Genesis 3:22: “And the Lord God said, “The man has now become like one of us, knowing good and evil. He must not be allowed to reach out his hand and take also from the tree of life and eat, and live forever.”

Yeshua. The Messiah is planted in the midst of the garden of Eden, already on the stage of History, hidden in Plain Sight in the Hebrew, before the human actors even enter the scene. Yeshua IS THE TREE OF LIFE.

Let’s go further and explore the references to the Tree of Life in Proverbs quickly, before fast forwarding to Revelation. Proverbs is known as a Wisdom Book. Proverbs itself describes what – or again, rather Who – is Wisdom (Proverbs 8)

Proverbs 3: 13 – 18 “How blessed is the man who finds Wisdom. And the man who gains understanding. For her profit is better than the profit of silver and her gain better than fine gold. She is more precious than jewels. And nothing you desire compares with her. Long life (read eternal life) is in her right hand, in her left hand are riches and honour. Her ways are pleasant ways and all her paths are peace (shalom) She is a Tree of Life to those who take hold of her, and happy are all who hold her fast.”

It gets even more obvious when you look with His eyes of understanding.

The next reference really makes it obvious to those that have ears to hear and eyes to see:

Proverbs 11:30 “The fruit of the righteous is a Tree of Life, and he who is wise (Who is Wisdom) wins souls.”

Now interplay the Name Yeshua with The Tree of Life: Re-write that as “The fruit of the righteous is Yeshua living in them and Yeshua who is wise wins souls.”

The next one describes how I feel about Yeshua and getting into His Kingdom. Honestly, some days I’m aching for it, for this evil hum of this world to end in my ears and mind, heart, soul and spirit. He is my only Hope for this.

Proverbs 13:12 “Hope deferred makes the heart sick but desire fulfilled is a tree of life.” Re-write that with Yeshua in place of the words Tree of Life.

If our desires are worldly or earth bound or temporal, this verse won’t make any sense to us. But if our desire is Yeshua and to see Him being honoured as the LORD of the heavens and earth, to see Him being honoured as the Messianic King reigning from Jerusalem, then this verse makes complete sense. Hope deferred gets us down but our desire to see Him in His rightful place with all evil done for under His feet is wonderful and gives us hope!

The last reference to this mystery Tree of Life, or so we might think from the English, is in Revelation 22:1-2: “Then he showed me a river of water of life, clear as crystal, coming from the throne of God and of the Lamb, in the middle of its street. On either side of the river was the tree of life, bearing twelve kinds of fruit, yielding it’s fruit every month, and the leaves of the tree were for the healing of the nations.”

That could be where I end this study. But as a Messianic Jew I have been given the beauty of being in between two places, inherently by who God has made me. I am on the bridge – a narrow bridge – between two worlds and two communities of understanding; one Christian, one Jewish, one modern church, one ancient faith and between two languages, one modern, one classical Semitic and as ancient as the first words of the Torah.

So, in keeping with that calling I want to take you all by the hand and lead you into the beautiful depths of understanding Yeshua from His ancient Jewishness, as our stunning Eternal Rabbi.

I want to show you something wonderful:

This is a picture of a Torah Scroll.  Full of the original language of God’s scriptures – Biblical Hebrew. Can you see the two wooden poles? You have to open them up to open up the Words of Scripture. You have to split them to open up the Living Words and Life Giving Wisdom of God.

Guess what the two wooden poles are called in the Jewish faith in Hebrew?  Etz Chaim. Which in Hebrew means… The Tree of Life!!

Not the trees of life, plural. But the TREE of life, singular. And yet you split open the tree of life to let God’s living water flow out.

Can you imagine what level of evangelists the Jewish people will be when they all start to become Messianic?!

But there is one more gem that the LORD Himself showed me recently that blew my mind even more. And once again, it’s only discoverable from studying the Hebrew. I was sitting in an online Bible study led by a Christian teacher (and non-Jewish) on the binding of Isaac. But I had the Hebrew open on my desk as he spoke to the online conference call. And suddenly all I could see in the Spirit of God was the following parallels:

It proves to me without any doubt that the Tree of Life really is a symbolism for Yeshua the Messiah and His substitutional sacrifice for us. Let’s read: Genesis 22 verses 1 – 14 Abraham ‘sacrificing’ Isaac.

“Some time later God tested Abraham. He said to him, “Abraham!”

Then God said, “Take your son, your only son, whom you love—Isaac—and go to the region of Moriah. Sacrifice him there as a burnt offering on a mountain I will show you.”

Early the next morning Abraham got up and loaded his donkey. He took with him two of his servants and his son Isaac. When he had cut enough wood for the burnt offering, he set out for the place God had told him about. On the third day Abraham looked up and saw the place in the distance. He said to his servants, “Stay here with the donkey while I and the boy go over there. We will worship and then we will come back to you.”  Abraham took the wood for the burnt offering and placed it on his son Isaac, and he himself carried the fire and the knife. As the two of them went on together, Isaac spoke up and said to his father Abraham, “Father?”

“The fire and wood are here,” Isaac said, “but where is the lamb for the burnt offering?”

Abraham answered, “God himself will provide the lamb for the burnt offering, my son.” And the two of them went on together.

When they reached the place God had told him about, Abraham built an altar there and arranged the wood on it. He bound his son Isaac and laid him on the altar, on top of the wood. Then he reached out his hand and took the knife to slay his son. But the angel of the Lord called out to him from heaven, “Abraham! Abraham!”

“Do not lay a hand on the boy,” he said. “Do not do anything to him. Now I know that you fear God, because you have not withheld from me your son, your only son.”

Abraham looked up and there in a thicket he saw a ram caught by its horns. He went over and took the ram and sacrificed it as a burnt offering instead of his son. So Abraham called that place The Lord Will Provide. And to this day it is said, “On the mountain of the Lord it will be provided.”

Are you ready for what it actually says in the Biblical Hebrew?

“And he split the tree, for the ascending sacrificial offering, and rose…” 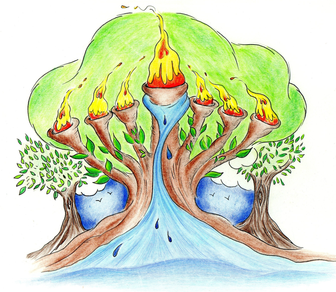 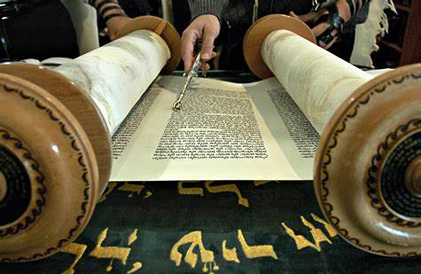