The Woman at Jacob's Well

“And He came to a Samaritan city called Sychar, near the piece of land Jacob gave to his son Joseph. And Jacob's well was there. Then, being wearied by the journey, Jesus sat down on the well. It was about the sixth hour. A woman came out of Samaria to draw water…”  (John 4. 5-7)

Sychar is Greek for the Hebrew name Shechem.  Shechem is still in Judea and Samaria today: “And Jacob came in peace to the city of Shechem… and he bought that part of the field where he had stretched his tent, from the hands of the sons of Hamor, the father of Shechem… and he set up an altar there.  And he called it (the altar) El, the God of Israel.”  (Genesis 33.19)

What is it about Jacob’s/Ya'akov's well that is so rich in prophetic Hebrew meaning that Jesus/Yeshua, the Jewish Messiah, would choose here to meet a non-Jewish woman?  Let's break it down verse-by-verse:

Genesis 29: 2 - 21:  “And he (Jacob) looked and behold, a well in the field… for from that well they watered the sheep and the stone on the mouth of the well was great: This is a hidden prophecy of the Messiah and the heavy stone on His tomb.  Isaiah 12 prophesies that "we will draw water from the Wells of Salvation".   In Hebrew "the Wells of Salvation" is "ma'ai-nei ha-yeshua".  It's even got Yeshua's name in it!  The Jewish people say this verse from Isaiah at the end of every shabbat!  And Jesus/Yeshua is our eternal Shabbat rest.

And all the flocks were usually gathered there: Christians gather at the tomb of Christ, spiritually speaking, to receive what He did for us throughout our whole lives as believers in His sacrifice for us.

and they rolled the stone off the mouth of the well and watered the sheep: One can only be watered as a sheep of Christ through the rolling off of the stone on the tomb  of Christ. This is because the wells of salvation were opened when Jesus/Yeshua rose again from the tomb.

and replaced the stone on the mouth of the well, to its place: I do not know exactly what this verse represents Messianically yet, but I did not want to miss it out. Maybe it refers to the Holy Spirit blowing where He pleases (John 3.8) or that at some point, the opportunity to receive salavation is closed off?

And behold his daughter Rachel is coming with the sheep: Abraham’s descendents are going to be gathered with the Gentile flock; they come to the same well, which is the Jewish Messiah. Rachel clearly represents the Jewish people. We know this from the Bible itself, as "Rachel is weeping for her children," (Jeremiah 31.15 and Matthew 2.18). This refers to the murder of the Jewish children.

And he said, ‘See, the day is still high; it is not time to gather the livestock: The time of the Gentile flock must first be gathered, before the flock of the tribes of Israel are gathered in (Luke 21.24).  The Bible clearly states the latter will not happen until the times are prophetically "evening"; getting dark (John 9.4).

Water the sheep and go feed them: This is exactly what Jesus/Yeshua commanded Peter/Kefa to do in John/Yonatan 21.15-17. He was quoting Genesis,  the very first book of the Scriptures, word for word.

And they said, We are not able until all the flocks are gathered and they roll the stone from the mouth of the well; then we water the sheep: Jesus/Yeshua said: “I have other sheep which are not of this fold. I must also lead those and they will hear My voice; and there will be one flock." (John 10.16) He is echoing the words of the Jewish shepherds in Genesis, as He is our Jewish Shepherd.

He was still speaking with them, and Rachel came with the sheep which were her father's: Rachel represents the Jewish people, the descendents of Abraham (see above).

And Jacob kissed Rachel and lifted up his voice and wept. Jesus/Yeshua lifts up His voice and weeps before raising Lazarus from the dead, a sign of His own coming resurrection. "See how He loves him," said the crowd. (John 11.35, 36, 43).   Jesus/Yeshua also weeps over Jerusalem (Matthew 23). He, as the Messiah, is echoing His ancestors actions in weeping over those He loves.

And Jacob served seven years for Rachel; and they were in his eyes like a few days, in that he loved her: There will be another  seven year period before the Jewish Groom can be with His Jewish wife, and that is called the "time of Jacob's trouble", or  tribulation for the sons of Jacob (Daniel 12).

and Jacob said ‘Give me my wife, for my days are fulfilled, and let me go in to her:”  When the days of "Jacob's trouble" are fulfilled the Jewish Messiah will go in to the Final Marriage Supper of the Lamb, bringing His Jewish bride with Him, to join with His Gentile bride, as one body of believers.

This is barely touching the surface of the significance of why Jesus/Yeshua met the Samaritan woman (Gentile) at Jacob’s well at Shechem.  Some other facts about Shechem:

So, in this passage in the New Testament about the woman at the well, Jesus/Yeshua is showing that He is gathering the Gentile sheep at the very same well as the father of the Jewish people, Jacob, fell in love with his future bride.   It is a well of romance and meeting our future Bridegroom.  And that is why Jesus and the woman talk about marriage at the well. Jesus/Yeshua is gathering His  flocks together.  He is saying He loves the Gentile church the same way, wanting to make her His Bride as she has no Husband, just like the Samaritan woman at the well.  “And that He make known the riches of His glory on vessels of mercy which He before prepared for glory whom He also called, not only us, of Jews, but also out of nations.  I will call those who were not My people, My people! And those who were not beloved, Beloved!” (Romans 9.23-26)

But there is even more prophetic brilliance of the LORD hidden in this parable:

And what time did Jesus/Yeshua come to the well to meet the Samaritan woman?  “It was the sixth hour.” (John 4.6)  Why did the LORD of Heaven give even the hour Jesus/Yeshua met the Gentile woman at Jacob’s well?

Because:  “And it was the preparation of the Passover, and about the sixth hour.... he (Pilate) said to the Jews, Behold your king!” (John 19.14). So, we know Jesus/Yeshua is the King of the Jews, and in meeting his future Gentile bride at the same well at the same hour, He is showing us He is both King of His Gentile bride and King of His Jewish bride. To make this point even clearer the LORD also tells us:

“Peter went up on the roof to pray, about the sixth hour. And he became hungry and wished to taste food. But as they were preparing, a dream came upon him…(which was about eating the unclean foods as representing the Gentile nations).  And he (Peter) said to him (Cornelius), you know how unlawful it is for a man, a Jew, to unite with or to come near to one of another race. But God showed me not to call a man common or unclean” (Acts 10.9-10, 28).   The LORD knew this would be a stretch for Peter/Kefa, who was Jewish.  So He explained it to him in one of the most central symbolism in the Jewish tradition - food! There is a bumper sticker which says: "Jewish holidays for dummies - they tried to kill us, we won, let's eat!"

So Jesus/Yeshua is also King of the Gentiles. He comes to the place Jacob fell in love with his Jewish bride, to come near the Samaritan woman (his Gentile bride), meeting both in the place Jacob named “the altar of the El, the God of Israel”. (Gen 33.19)

Sounds like a Messianic Jewish wedding to me!  The coming together of both Jew and Gentile believers in Messiah is one of the most beautiful acts I know and is the centre of God's heart.

A few years ago, my closest girl friend, a Gentile Christian, married a Jewish Messianic man and my daughter was the bridemaid. It was the most beautiful wedding I've been to to date, because it was so full of the symbolism of God's One New Man (Ephesians 2. 14-16).

And amazingly, Yeshua prophesies that she, the Gentile woman, has had five husbands. Why does the LORD put this piece of information into this parable?  Because the Gentiles will have had five empires (husbands) before the Gentile world will be ruled by the King of Kings from Jerusalem (Yerushalayim):

2.  The silver breast and arms – Medo-Persia

3.  The brass belly and thighs – Greece.

5.  The feet partly of iron and partly of clay - the divided Roman Empire

“And the one you have now is not your husband.” (the anti-christ.)

In Daniel’s dream, after these stages, the Kingdom of the Messiah then comes in. “Because you saw that the stone (the stone over the well and tomb) was cut out of the mountain (Heaven) without hands (Yeshua was not created but is One with the Creator GOD), and that it broke the iron, the bronze, the clay, the silver and the gold in pieces; the great God has made known to the king what shall occur after this. And the dream is certain, and the meaning of it is trustworthy.”

Finally, in Hebrew Shechem shares its root with the word for:“shoulder blades/upper part of the back”.  This is precisely where Jesus/Yeshua carried His cross. It also represents how He carries us, His sheep. “And finding it (His lost sheep of Israel and the nations) He puts it on His shoulders, and goes home rejoicing." (Luke 15.5)

Thank you LORD for opening our eyes to see You as You are, hidden  in Your Hebrew Scriptures. 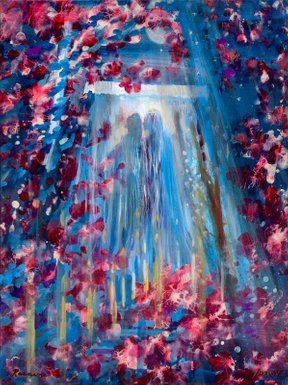 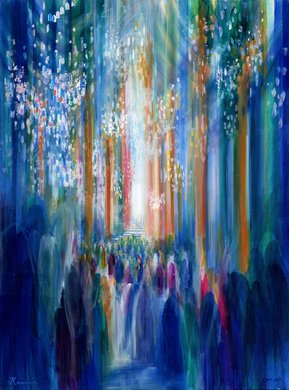