Most Hebrew words have a grammatical "root". The root is commonly created from three consonants,  which  then  form a Hebraic  "word-family." Therefore, the  root word will share a relationship with other words of the same root. This word-family will then give us deep insight into the LORD's intended meaning of each individual word, within the shared word-family.

The closest concept we have, in the Latin based languages, is  when a group of words start with the same prefix, such as community, common and communicate.  We understand they all  have a shared basis, yet they each develop the meaning while sharing a connection.

With Hebrew root words, there are distinctions from the English concept. Understanding these distinctions will help us greatly, in deepening our understanding of the LORD through  His Biblical Hebrew language.

In  Hebrew, the  vowels can change while the consonants stay the same. Changing the vowels will  change the meaning of the word, either to a  related meaning or, sometimes, to an  inverse or negative meaning. This cannot be discovered so deeply when reading the Bible in English.  This is because it is impossible to see, in the English translation, which words are related to which other words in the Hebrew.

Hebrew is like diving into an endless clear blue ocean, in which you can breathe deeply and never drown. This beautiful language is  like a coded message of how the LORD wants to relate the meaning of one word to another.

For example, the Hebrew word for "Salt" is related, amazingly, to the  words for: "War", "Dreams", "Bread" and "Growing Strong", among others. This gives a deep hidden meaning to Jesus'/Yeshua's teaching on  the "Salt of the Earth" and not losing one's "saltiness" (Matthew/Mattityahu 5.13).  My prayer is that, if more people in the church knew about the Hebrew language,  they would then love, support and learn from their Jewish brothers and sisters, rather than malign or ignore them.

"And if some of the branches were broken off, and you, being a wild olive tree, were grafted in among them, and with them became a partaker of the root and fatness of the olive tree, do not boast against the branches. But if you do boast, remember that you do not support the root, but the root supports you." (Romans 11.17-18)

The second aspect to note, within the Hebrew language, is that the changing of the vowels in the "root" can also change the verb  stem.   In Hebrew, there are seven verb stem structures. Three are active, three are passive and one is a combination of both the active and the passive. So, in the Hebrew verb structure, the LORD makes it very clear  how severe an action is and who is doing or causing the action. So, there are even levels of personal responsibility for our actions built into the Biblical Hebrew.

So, adding small vowels, and occasionally a prefix or suffix, will literally change the intention, intensity, cause,  subject or object of the sentence. For example, by changing the verb stem of "he hit", while keeping the root the same, it  can become:

The vowels in Hebrew are written below, above and within the consonants as tiny dots or dashes.  I believe this is partially to what Jesus/Yeshua was referring  when He proclaimed: "For assuredly, I say to you, till heaven and earth pass away, one jot or one tittle will by no means pass from the law till all is fulfilled." (Matthew/Mattityahu 5:18).

I believe he was saying, as  a Jew: "Don't move the vowel marks around, either physically or metaphorically, because you'll change the meaning. You'll change who is responsible, the intensity of what the LORD is saying and the cause of why things happen. You'll literally put words and motives in My mouth, as the One True God, to suit yourself."

This focused accuracy, to the Hebrew letters, jots and tittles, is seen in  the years of training a  Jewish scribe must attain, even today, to qualify  to copy a Torah scroll.  This is precisely so he  doesn't copy one tiny jot or tittle inaccurately, and thereby change the meaning or intention of God's Holy Word. I pray, through His Spirit, that I will always seek to interpret His Word as accurately as posssible through Jesus Christ/Yeshua HaMashiach. I also pray the LORD helps me understand more and more of His Hebrew language, in order to understand, worship and love Him more. 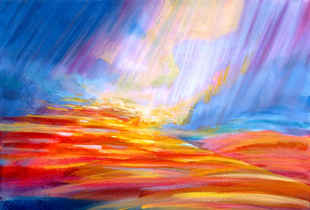