Purim is the time of year which celebrates the victory of God hidden within the book of Esther. I say hidden because God is never mentioned outright in this book of the Bible. But His purposes, character and love for His Jewish people secretly weave through this beautiful historical account.

The book of Esther is an account of narcissistic egotistical Haman trying to outwit, humiliate and destroy the Jewish people, because he wants the favour they’ve got.

The book of Esther is a fight between good and evil – the LORD’s appointed vs. the self-appointed. Which means it’s not a fair fight - because the LORD always wins.

But, I see this tussle between God’s choices and the devil’s pride working out in people’s lives, all around me. Most obviously and basically, I see this in the entertainment industry; which is full of egos oozing the old mantra: ‘look at me, look at me, I want validation, my ego needs human praise, worship me!’ I see it in politics all the time. I see it in anti-Semitism towards the Jewish state of Israel. And I also occasionally and sadly see it within the church and ministry, which is more subtle.

To make this tussle between human pride and God even clearer in the book of Esther, Haman is a powerful man, while Esther is an orphaned Jew who is favoured to become Queen, the King’s bride.

This study is not to tell the story of Esther celebrated each year on Purim.

It is to look at the spiritual model that is hidden in the Hebrew in this ancient story, so we can follow in the footsteps, both practically and spiritually, of those who are looked after and given victory by God.

There are many studies already out there on the meaning of Esther’s name and discussing the hiddenness of God in the story. But I’ve never read one on understanding the adversary in this scenario and the Biblical models of its repeated defeat.  So, I’m going to introduce you briefly to this adversary who tries to overcome, humiliate and destroy God’s appointed people.

Does that remind you of anything you’ve seen in the currents papers and through world history of the way the enemies of God try to come against His calm, powerful, appointed people and plan?

When we stand in God’s protection one of the ways God’s enemies are going to try to outwit, humiliate and overpower us is by appearing like this Haman spirit.  Have you ever noticed how bullies come in groups, with lots of tumult and noise? They try to confuse and when they don’t get their way they rage. This is part of the manipulation to try to overthrow. They intimidate, they want recognition, they scheme and they try to instil fear.

God wants to show us some inside Hebrew information hidden in Haman’s name to prepare us for what to expect from His enemies when they don’t get their own way. God has been reminding me recently that I often expect the devil to play fair. He doesn’t. Nothing is off the table for him. But although he doesn’t play fair he does play predictably, based on Scripture. He lies, he huffs and he puffs but he literally cannot blow the House of God’s Word down. And in so trying he always hangs himself. So, what does Esther do when this Haman-man-spirit comes against her and God’s people?

Esther stays calm, focussed on God’s plan and calls on Him for deliverance. She trusts her God.

So, is Haman a real person, or is he an allegory of a spirit that comes against God’s people? The beauty of the Hebraic approach, as opposed to the Greek, is we don’t need to choose. He’s both. Which means if he’s attempted it once, he will follow this spiritual attack model again and again. The more the LORD shows me patterns in the Bible, the more I often think the devil is boring and unoriginal. God is The Original, the devil is just a very very VERY poor creature of imitation.

The devil loses the fight through pride and arrogance every time. This causes him to fall into his own net – or in Haman’s case off his own gallows - and lose the bigger war. He has no other option to be blindly driven by his pride and ego, it compels him, that is what he was destined for. Having said that, he is a spirit and the only way to defeat him is through the Word of God, not our own strength.

If we understand that behind Haman is a spiritual adversary then we can fight back the lies of noise, confusion and tumult with the TRUTH OF GOD’S WORD.

The Power of the Word of God to defeat the Haman spirit:

So, here’s my main point - if we understand every other time the Hebrew word “Haman” is used in Scripture we can declare what it’s end is, time and time again. We can also educate ourselves through these verses in how this Haman spirit will look and feel, so we are prepared for its reactions.

Basically, the more we know and understand the Word of God, the more we are not surprised, but rather simply in further training in the LORD. Each battle will then bring more maturity, victory and joy in our King and greater intimacy with Him. The battle is therefore not designed to push us further apart from our King but closer together with Him. It’s almost like He designed the battle for that very purpose in the first place, huh?

So, here is every other time the Hebrew verb or word Hamon is used in Scripture and its translation:

Two of my favourites:

1)Isaiah 51:15 “But I am ADONAI your God, stirring up the sea and making its waves roar: ADONAI of the heavenly armies is His Name. And I have put My words in your mouth, and covered you in the shade of My hand, to plant the heavens and found the earth, and to say to Zion, You are My people.”

So, here the LORD is saying this haman spirit will look like raging seas, powerful waves that threaten to drown you or overthrow you. It is also worth noting that God uses the seas in the Scriptures to often represent the noise of the nations coming against His people. This pattern is very evident if one reads all the above references.

But how do we overcome this Haman spirit? By using the LORD’s words which He has put in our mouths.

2)Psalm 83:3 “God, don’t remain silent! Don’t stay quiet, God, or still, because here are Your enemies, causing an uproar; those who hate You are raising their heads, craftily conspiring against Your people, consulting together against those You treasure. They say, “Come, let’s wipe them out as a nation, let the name of Israel be remembered no more.”

Did you know that Psalm 83 is the haman spirit again? It will be hanged on its own gallows. The very devise it conceives to destroy God’s people is the very device that will destroy itself. This pattern can be relied upon because it is the battle strategy of God in His Holy Word.  So, don’t worry or panic. Just pray, fast and seek the LORD, just as Esther did. Approach King Yeshua, and rely on His Sceptre of Love for His bride to carry you into His inner chamber to plead your case on behalf of His people and purposes. Then watch Him work to overcome His enemies. It is worth reading to the end of the book of Esther to read not just how Haman was hung on his own gallows but how even his mates realised if he was coming against the God of the Jews he would fail. And then how much ground, victory and spoil of the enemy the LORD gave His people!

So, these are just two examples. This Purim is the LORD inviting you to read all the above verses to better understand the Haman spirit, how it repeats itself and how the LORD defeats it, so that you can declare His Words of Truth over your battles? It is also very calming to read the above verses, because through them the LORD shows over and over that He is always victorious over great tumults such as nations, uprisings and evil people in positions of human power.

Happy Purim to all pursuers of righteousness and seekers of the LORD! 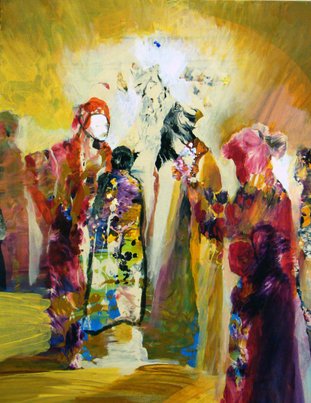