On 05/06/21 the LORD showed me the following Rapture reference, hidden in plain sight in His Word. Just before what I was shown is a hidden Rapture passage, Yeshua feeds the great multitude, supernaturally, with five loaves and two fish! Feeding those who have gone out to listen to and meet Him, when there is no food for them in the natural or money to buy it. Remember that. Incidentally, I love how He says to His disciples: “From where may we buy loaves that these may eat?” (John 6:5) Because everything about His question is glorious, very gently humorous and all-knowing, at the same time:

“But He said this to test him (to test our hearts too in how much we trust Him) FOR HE KNEW WHAT HE WAS ABOUT TO DO.” (John 6:6)

So, that’s the supernatural setting of the following RAPTURE revelation: a preceeding supernatural action from YESHUA all by Yeshua Himself, not us! And, just like now, He tests us with the question of trust and understanding of His SUPERNATURAL POWER in the face of the seemingly impossible. And here, I believe, is one of many supernatural answers, hidden in Scripture for us to have revealed to us by His Holy Spirit in His timing. Note the order of events. No food for the multitude. Then Supernatural Provision. Then this, later on the same day!

“And when it became evening, His disciples went down on the sea. And entering into the boat, they were going across the sea to Capernaum. And darkness already occurred, and Yeshua had not come to them. And the sea was aroused by a great wind blowing.

Then having rowed about twenty-five or thirty furlongs, they saw Yeshua walking on the sea.

And He having come near the boat, they were afraid. But He said to them, I AM! Do not fear.

Then they desired to take Him into the boat.

And instantly the boat came to be at the land to which they were going.”

I also believe this is the Rapture because the LORD helped me to find a cross reference to this miracle being a supernatual sign of the reality of the Rapture. I say “sign” because in Hebrew, the word for “miracle” (נס) literally means “a sign from heaven”. So, ALL His miracles in the gospels are actually also Prophetic Signs of eternal spiritual models through which He operates.

“And there will be signs in the sun, moon and stars. And on the earth, anxiety of nations in perplexity of sound of sea, and of waves, and fainting men from fear and expectation of the things coming on the habitable earth; for the powers of heaven will be shaken. And then they will see the Son of man coming in a cloud with power and much glory. And when these things begin to happen, stand up and lift up your hearts, because your redemption draws near.” (Luke 21:25-28)

And in both John 6 about the boat, and in Luke 21 which I’ve just read, Yeshua draws near in a time of fear:

So, there is the Rapture, I believe, hidden in plain sight.

It is also a promise in this life. There are some ‘lands’ we cannot get to in our own strength, no matter how hard we row. I believe He will deliver me SUPERNATURALLY to the “land” – spiritually, practically and emotionally - to which He wants me. He sees us rowing hard. He comes to us, when we are just beginning to think “darkness has already come and He hasn’t come to us yet!” And He supernaturally completes the impossible journey against the storm blowing hard around us.

But only if we are in His boat, buoyed up on His Holy Spirit, rowing hard to follow Him and be where He is, expecting Him to come to us.

Yeshua’s Love is guiding me to say this first. Because the next few WARNINGS of His coming judgements are difficult to process, and we need His Comfort first to bear it, and of His Promise of Supernatural Deliverance out of His Wrath on wickedness.

TWO SHORT WARNINGS OF WHAT IS COMING NEXT:

LORD I feel like Your judgement is about to strike, it’s almost intolerable!

I pray for my brothers and sisters in Christ, wherever they are, that we get to do this right with Your strength. LORD I feel so tired. Am I going to die soon in the natural? When is my time to come to You? I’m so so tired of this world. It feels so dark. Help us all LORD.

Look up! Your King is coming!

“I’ll keep you alive until I want to take you. Your times are in My Hands, not theirs.”

“So much loss its indescribable.”

Your mouths are full of vanity.

Prophecy – what to do IN those 9 months [Note: any instructions left here with periods of time on this channel do not exclude the Rapture at any moment.]

Then the LORD Yeshua said “Jeremiah 4”. I looked it up. I really recommend you read it. Key points:

“If you will return to Me, O Israel, says the LORD, return to Me. And if you will put away your hateful idols out of My face and will not waver, and you will swear as the LORD lives, in truth, in justice, and in righteousness, even the nations shall bless themselves in Him, and in Him they will glory.” (Jeremiah 4:1)

“Blow the rams horn (warning) in the land. Flee for safety and do not wait. For I will bring evil from the north and a great ruin. The lion has come up out of his thicket and a destroyer of nations has set out. He has left his place to make your land a waste.” (Jeremiah 4:7)

“O Jerusalem, cleanse your heart from evil so that you may be saved. How long will your vain thoughts lodge within you?” (Jeremiah 4:14)

“Tell it to the nations. Behold, proclaim against Jerusalem. Besiegers are going to come from a distant land, and they will set their voice against the cities of Judah. Like watchmen in the field, they are against her all around, because she rebelled against Me declares the LORD. Your ways and your doings have done these things to you; this is your evil, because it is bitter, because it reaches your heart.” (Jeremiah 4: 16-18)

“My heart is restless within me. I cannot be silent, for I have heard, O my soul, the sound of the ram’s horn, the alarm of war!” (Jeremiah 4:19)

To my amazement, verse 28 literally says both the words “Black” and “Mourning” just as the exact words He gave me above! “The earth shall mourn for this, and the heavens above shall grow black; because I have spoken; I have purposed, and I will not change My Mind, nor will I turn back from it.”

Yet the LORD says in this passage: “Yet I will not make a full end” (verse 27)

Later on the same day (18/06/21) the LORD gave me Jeremiah 21. I pray every person hearing my voice will read it for further instructions of His Holy judgements coming.  Because, on entering this year I woke up one morning and heard the words “Year of War” which I have spoken about in previous prophetic words on this channel.

TWO SHORT VISIONS, ONE OF COMFORT, ONE OF WARNING:

I have spoken with brothers and sisters in Yeshua that I can have days of great fear in the LORD / imminency of His Holy Patient judgement.  In my journal notes at this point I heard the word “COMFORT”. And then He gave me a vision. He lifted me up, I was so small. I looked into His eye, in this vision it was huge like a galaxy. It is beyond beautiful. So pure. So clean. I say to Him: “I feel very very sad humans did this to You.”

He gently replies: “It’s for the best, for their best.”

I saw myself completely clear like crystal. I say in amazement “How did You do this?!” knowing my sinfulness every day. For example, early this morning (18/06/21) I got very irritated by the busyness of traffic, there was a diversion, a delay. I just resented everyone being “in my way”, delaying “me” - obnoxious! - when He loves every soul; whereas I saw them as an inconvenience. HIS POWER TO CLEANSE US IS ALL WE HAVE TO RELY ON.

“The voice of your watchmen, they lift the voice together, they sing aloud. For the shall see eye to eye when the LORD brings back Zion. Break out, sing together, waste places of Jerusalem, for the LORD comforts His people, He has redeemed Jerusalem. The LORD has bared His holy arm in the eyes of all the nations and all the ends of the earth shall see the salvation of our God. Turn aside, turn aside! Go out from there! Touch not the unclean! Go out of her midst, purify yourself, bearers of the vessels of the LORD….the God of Israel gathers you.” (Isaiah 52:8-12)

Lastly, I then I saw a timer:

From 2 – 1 – explode. I didn’t see the explosion, just the timer moving, right up to the split-second pause before it moved to the final moment. Then I “knew” an indescribable explosion(s) happened.  I knew it meant war and between whom. I knew which nation had set the explosion.  I’m sure many of you do too. It’s right there in Jeremiah 21 mentioned above. He describes what will happen, where people will run, why the judgements have come, from where the enemy will arrive etc.

But remember, little children of God, that: “Eye has not seen, and ear has not heard”, nor has it risen up into the heart of man, “the things which God has prepared for those that love Him.” (1 Corinthians 2:9)  LORD are we ready to meet You? If our earthly lives ended today, or tomorrow, or in three days time, are we ready to meet with You? Come LORD Yeshua, Come! 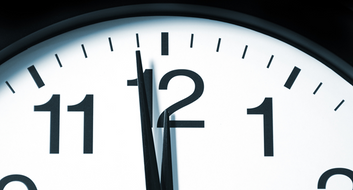