Calling up the Jewish and Gentile Bride 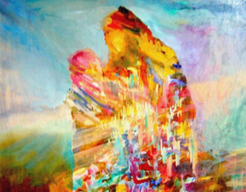 Welcome. Please read this paragraph, before taking personal responsibiity in deciding whether to enter this site, much like deciding whether you want to enter a Biblical fellowship which you know is humbly trying to apply all of God's Word to all aspects of life, not just some. Thank you for your respect, and God bless you in Yeshua's Name.

When we are called to read from the Torah in the Synagogue, we say we are "going up" (Aliyah). When the Jewish people return to our homeland the Land of Israel (Eretz Yisrael), we say we are "making Aliyah." Aliyah literally means to "go up, to ascend." But there is a third "going up" happening! To those who believe in the God of Israel, the LORD Yeshua, we are being "called up" to live increasingly holy purified lives. To learn to trust in His Word more!

We believe both Messiahs are One and the Same; that He came first as a Suffering Servant and will return as the Warrior King of Israel. So, rather than two Messiahs with one arrival, we believe that there is One Messiah with two arrivals. We believe He has already come once according to the New Testament. We believe the Messiah's Name is Yeshua, which means in Hebrew "One Who Saves from YHVH". We believe He is, was and always will be the Jewish Messiah, as well as the Saviour of all who call on Him from every nation for their salvation.

We believe the time is now for the Bride of Christ (the true church) to break off a Greek mindset and return to her Hebraic roots. Then she, together with her Jewish brothers and sisters, will discover how thin the veil really is between Jew and Christian. We are seeing a move of His Holy Spirit (Ruach HaKodesh) in bringing down this centuries-old wall of hostility. It is not a wall that separates us but a thin veil, so thin you can blow a kiss through it.

Our prayer is that this site and its teaching will give the church a humble understanding of God's plan for His Jewish people and a deeper love for Israel. We also pray that our Jewish brothers and sisters, whether in Israel or the Diaspora, will discover afresh, with our sometimes weary hearts, how cherished we are by the God of Abraham, Isaac and Jacob (Elohei  Avraham, Yitzchak v' Ya'akov).

It is time for the church to re-learn the Jewishness of Christ and it is time for the Jewish people to experience the love of the church. Together we are 'the People of the Book' and we need each other now  more than ever. Let's call each other up in love and friendship to become the Jewish and Gentile Bride, ready for Heaven, following in the footsteps of our Warrior King.

Most of the stunning Art Prints on this website are by Jewish Israeli Artist Yoram Raanan unless otherwise labelled. Please credit accordingly.