The Tent of Meeting - a place to shine

A little while ago  - out of the blue - God said "Study Tent of Meeting".  I was walking around the house and thought, I know that phrase a fair bit from the writings of Moses.  But I don't really know what it means in Hebrew.  What do the actual Hebrew words mean?

I really hope you like this website - the main purpose of it grew out of  the amazing truth that Jesus/Yeshua the Jewish Messiah, as well as the Saviour of the nations, is hidden in all the Biblical feasts. After I'd chat or speak on this from a Messianic perspective, lovely people kept asking: "Are these notes online?!" In Hebrew GOD calls the Feasts His Appointed Times.   And when I looked up the words for Tent of Meeting it hit me straight away.

The  Hebrew for Meeting is:  Moed.  I know it well because it literally means "Appointed Time".  It's like GOD is calling the Tent of Meeting 'the Tent of His Appointed Times'. Moed is exactly the same Hebrew word GOD uses to describe His Feasts; Passover, Unleavened Bread, First Fruits,  Shavu'ot (Pentecost), The Feast of Trumpets, The Day of Atonement, The Feast of Tabernacles and Shabbat.  All of them are called His Appointed Times. And Jesus/Yeshua is hidden in all of them, waiting to be found. The Appointed Times are celebrated every year in the Jewish calendar as times when God  showed up to reveal more of His Character, Salvation Plan and Holiness.   So it's like God was saying to Moses: "Go into my Tent of Meeting, My Tent of Appointed Time and I'll show you My Character, Salvation Plan and Holiness!"

As stated, Yeshua / Jesus as the Messiah is hidden in plain sight in all of the LORD's feasts.  So it really hit me that the Tent of Meeting  (the Tent of Appointed Time) was an incredible place.

I then found God asking me why the Tent of Meeting was important for me to understand now? For what was it a model?

Jesus says He comes to dwell in us but if it was written in Hebrew it would literally read: "Tabernacle" with us" ie: spend the whole time with us as if we were in the first model of Tent of Meeting!

And then lastly we as Believers in Yeshua / Jesus - both Jew and Gentile - through the Holy Spirit are the pre-model for:

No matter how much I want to, I can't dwell with Him perfectly here on this earth, because of the way I limit Him. I doubt, I hold back, I delay, I may not  trust quickly enough or I may become impatient and not wait on Him and His Timing.  And some days I just mess up, usually when I haven't had enough time focussing on Him. But in the future at some point I will tabernacle (dwell with Him) in Heaven perfectly because of what Jesus/Yeshua has done for me through His Sacrifice. But for now we have the model of Him living in us and walking around with us, which goes all the way back to Moses and the Tent of Meeting. So I felt like God was saying to me that it was pretty important to understand that first model, as it would help me day to day now.

If I want to meet with God now, everyday, He's asking me to spend time with Him, to hang out with Him, study Him, listen to Him, in many ways be  in an invisible tent with Him; even if I'm in the supermarket, driving my teenagers somewhere, cooking, working or walking on a beach.

The LORD uses the exact same word - Moed  - (appointed times/meeting/seasons) when He first describes why He has made the sun and the moon.  He says in Genesis that He has made the moon and the sun "for signs and for seasons" (Genesis 1: 14-15).

To anyone with Jewish heritage and Christians who love the Hebrew, the word Moed is one of the first we come across.  Moedim is the plural and means the feasts or appointed times throughout the Biblical year.  The months and feast days are all based on the Biblical calendar based on the moon, not the gregorian calendar which is named after Greek  mythology and Roman leaders.  I'm not that 'religious'  to use one over the other, particularly if it puts a 'stumbling block' in someone else's way in learning more of  Jesus/Yeshua. But it is interesting to know the background of the words we use from which we mark our yearly rhythms and important dates.

So, the appointed times are GOD's Calendar.  Amazingly, although GOD entrusted them to the Jewish people on Mount Sinai, He doesn't call them The Jewish feasts. He calls them His Feasts, so that there is room for everyone to discover Him  hiding  as Messiah in the same appointed times the Jewish people keep each year through time.  In fact, pretty much all my Jewish friends who are secular will still celebrate the Feasts, especially Passover and Tabernacles.   So the Feasts are a way to bring deeper understanding of the Jewishness of Jesus to the church and a way to bring  a Messianic understanding to the secular and religious Jewish communities.   If you'd like to find out more about the Messiah (Mashiach) hidden in the Feasts please browse this section of the website.

But here is where I became more  amazed (and I always do when it comes to the LORD because He's the kindest, strongest, most loving, faithful genius I know).

Moed  also shares its root word in Hebrew with the  word:  Moad.   By one vowel change the word for Meeting, Feasts and Appointed Times becomes the Hebrew word for:  rank, appointed place of a soldier.

The church can fall down in explaining God with sweet songs and tambourines. But the God I know is a Warrior as well as my Best Friend and Protector.  He is full of masculine power and fights for those He loves.

So the Tent of Meeting in which  Moses and Joshua would meet with the One True God was also The Tent of the Soldier!  It was where a Warrior went to hang out with his Commander of the Universe.  If you're in a current spiritual and physical  battle, His Tent of Meeting is where to go, regularly.

It also speaks to me about how important it is to find our "tribe", the people God brings into our lives, who we want to stand with, in our proper ranks - places to comfort, support and fight for each other.  You have the same short-hand language and feel comfortable with them.  You fight for the same principles and see the world the same way. It's  refreshing, invigorating and relaxing all at the same time. They help you find your voice which is a Heaven-sent gift  for which I am so thankful.  I highly appreciate these people  because I know what it's like to not have their voices there, when you feel you're accidentally living on the wrong planet.  Those days when you feel like the book and movie character Ender Wiggin.

Then there are others who fight similar battles but maybe from a different angle or personality. We don't have to all be in the same battalion to appreciate a different battalion, say, to our left on the battlefield.  But we can ask God to show us our place,  our small tribe, and  encourage others in their battalions and in their places.  Because we're all fighting under the same King, just from  different positions.  I have friends in two other countries that are doing the same as me, doing what we can to bring love and  understanding between Jewish and Christian people.  And occasionally we just follow our Commander's orders when He gives us a transfer and moves us into a different place. He so knows what He is doing.  Have faith.  I tell myself sometimes "move how He tells you - it'll be worth it and then some!"

I think as I have studied and found Jesus/Yeshua in the Feasts (Moedim) I have come to understand more of my appointed place as a trusting warrior (Moad) from one season (Moed) to the next.   I move with Him more.   It is very cool when you have someone else's back in prayer and friendship and they have yours.  It's a strong invincible position in Jesus and it works.  And it is always more than twice, three, or four times as strong as two, three or four of you would be on your own.  A mystery and I don't   understand how God sets it up but He does. And I  love Him and my small tribes for it.

I thought I was done.  To discover that the Tent of Meeting was a place for  warriors and a place to find Him in the Feasts was moving enough. But God said gently  to me as I was walking away:  "What about tent?! I told you to study the words Tent of Meeting."

In Hebrew it is "Ohel". I knew this word. But I didn't know it shares its root with a Hebrew verb.    If you change the vowels (dots and dashes) it becomes "Ahal" meaning:  "to be bright, to shine".  I love this.  If I spend time with God, meeting with Him, being a trusting warrior, whatever I'm doing He will make me shine with Himself.

When we spend time with Jesus/Yeshua, listening to Him, moving the way He says, acting on His instructions, being courageous and determined to move forward with faith,  we will shine.   I'm so thankful Moses wasn't the only one who could enjoy such gorgeous times with the Commander of the Universe in his own private Tent.  Thank you LORD for being my Saviour and King. 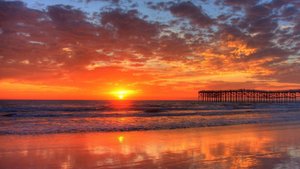 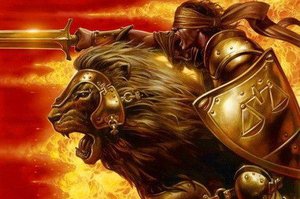 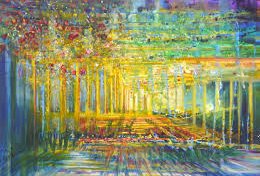