To Come In The Name

You may have heard this Hebrew phrase "Barukh Haba BeShem Adonai." It means "to come in the Name of the LORD." Jesus quoted King David from Psalm 118 when He said it over Jerusalem as he wept in Luke 19. And King David first used it as a young boy when he faced Goliath in 1 Samuel 17.

Following God's own example, that is probably why Ya'akov knew to change his own son's name from Ben-oni (son of my sorrow) to Ben-yamin (son of my right hand).  He was prophesying a different character, purpose and mission over  his son's life, after the death of Rachel in childbirth.

To change one's name mid-way through life is a strange concept to the Greek mindset and modern church.  But to the Hebrew mindset it comes naturally.  This is because, at the Bar or Bat Mitzvah, children are encouraged to choose an additional name to show their increased responsibility walking with the LORD and their developing relationship with Him.  Also, if a Jewish person returns to their Jewish identity, they often give themselves a new Hebrew name.  In fact, particularly in the Diaspora, they will have a civil name used for everyday life and a Hebrew name used in the Jewish community and  Synagogue.  Sometimes  we will change our name to hide our Jewish identity. One of my ancestors did this  because she was a Jew in England during a period of history when Jews had been expelled from 1290 to 1657. Her original surname was Cohen, so pretty obvious! My family history, as is the case for many people with Jewish heritage, is a classic example of assimilation and re-discovery. Two Jewish ancestors even married in a London Chapel in the 19th century but wrote on their marriage certificate that they were Jews!  The Synagogue where some of my ancestors lived in East London later became a church, and is now a mosque.  Instinctively, therefore, Jewish people often understand that names are significant, either in showing or hiding  their Jewish identity.

Jesus' name in Hebrew is "Yeshua".  In Hebrew this means exactly the same as saying "One Who Saves from YHVH" or "The LORD Saves".  Therefore the LORD was prophesying exactly Who Yeshua is and what His character, purpose and mission is and continues to be -  by His Name.    Imagine his mother calling him in  as a child. It would be like listening to this in Hebrew:  "One Who Saves from YHVH, wash your hands, dinner is ready!"

"To Come In The Name of the LORD"  is exactly what Yeshua meant when He prayed to His Father for  His disciples (talmidim): "I made Your Name (Shem) known to them, and I will continue to make it known; so that the love (ahavah) with which You have loved Me may be in them." (John/Yonatan 17.26) This is like saying: "I made Your Character and Purposes known to them."

So, when we say we "Come in the Name of the LORD"  we mean we come in His characteristics, His purpose and His mission. But, if we come in our own characteristics,  if we seek our own ministry's glory, if we decide the direction of our own life's mission, or worse still let others decide that for us, then it really doesn't matter how many times we say "I come in Jesus' Name", we are   not coming in the Name of the LORD. We are coming in our own name, for our own glory, popularity, comfort or compromise.

Much damage has been done in history and today by us doing this, without acting in the character of the LORD Yeshua.     I have noticed that in the church these two spiritual opposites - true faith vs. religion - can look almost the same.  They can sound identical. The third commandment in Hebrew means exactly this: "Do not use the LORD's Name in vain".  The Hebrew word for vain is 'sha-aw', which means  'falseness'. So, quite literally, "Don't be false to Who God is, yet say you're doing something in His Name or  as a Christian." Wow! That's convicting. Because we are often dishonest with ourselves and God, if we're honest!

The Name of GOD in the English translation of the Bible is mostly "the LORD" in capitals.  But in Hebrew there are so many Names for the     LORD,  it is a  lifetime's study.       Just exploring a few of His Hebrew Names profoundly deepens our understanding of the full and true character of God.  It helps us spot when the message of the Bible, and particularly the New Testament, is diluted or when the name of God is applied for human goals, not His.   The LORD once said to me "The Kingdom of God is very different to the kingdom of man's church."    It took me a little while to understand what He was saying. He meant I will see people receiving rewards in Heaven who were very hidden and/or unnoticed by the church. And, tragically and heartbreakingly, some people who were seen in church won't be there. An acquaintance, a close friend of  Chuck Missler who is a man who really teaches the Word, once said to me: "75% of the church isn't real."  I hope he's wrong. Only God knows if we're living holy lives behind closed doors and in our hearts. Watch someone's life long enough, and  our own, and we can begin to see whether we are growing in faith and holiness, or falling away into our own glory, luke-warm faith or worldly living, all whilst being "active" in the church and saying Christian-sounding words. It's a constant struggle, to live to please Him above all others, not ourselves, nor others, no matter how positioned  they are in our lives.

The LORD has placed an eternity of  hidden things in the Hebrew names which He uses for people, places and Himself in the Hebrew Scriptures.    The revelation of the Kingdom of God in Hebrew is like finding gold under your land, or like swimming in the clearest ocean where you can breathe in the very depths and never want to come up.    It's like scratching the surface of beautiful eternity.  I regularly feel like falling on my face in awe, if I'm honest.  I'm going to encourage myself  to regularly go treasure-hunting deep into the Hebrew.  Don't know Hebrew? Don't be discouraged, start with one Hebrew letter. The LORD's character is  waiting to be discovered  more deeply and accurately in each and every letter and meaning.  Browse the Hebraic and Prophetic teaching pages for individual studies on the Hebrew meanings of often well-used Christian words, such as Oil, Salt, Chosen, Wings, Repent, Promise and even Feet!

LORD, help us to really come into other people's lives, our families and workplaces, in Your Character and please forgive us when we clearly don't, in Jesus' Name! 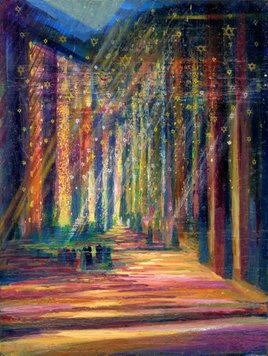