There's a word I've loved for a long time in the Hebrew Scriptures. It's the word:

"Segulah."  It means "treasured possession."  Other translations of this word include: "personal property, peculiar treasure, jewels and special." Recently, I came across the following Hebrew study on this exact word and it is so moving, I would like to share it here, with full copyright and acknowledgement to the original author and website called: Bridges for Peace, Your Israel Connection. Please credit accordingly.

I would especailly like to dedicate this piece to all my Messianic friends; near, far, known and unknown through this website. Occasionally not accepted both by the church or the Jewish orthodox community, we sometimes wonder who we are.  But we find our true identity and love  in Yeshua, the ultimate Messanic Jew.  May this speak to your wondering, sometimes displaced, heart. But this also speaks to anyone and everyone who loves, serves, follows and fears the Holy God and Messiah of the Bible through Yeshua:

"Segulah is used eight times in the Hebrew Scriptures. Six of those times, it refers to Israel (Exod. 19:5; Deut. 7:6, 14:2, 26:18; Ps. 135:4; Mal. 3:17). It is translated in various Bible versions as peculiar treasure, special treasure, or treasured possession. One commentator defined it as “property in the special sense of a private possession that one personally acquired and carefully preserves.” Rabbi Sheldon Marder, on MyJewishLearning.com, gives Rabbi Hirsch’s definition (19th-century) as an “exclusive possession to which no one else except its owner is entitled and which has no relationship to anyone except its owner.”

In ancient times, it referred to the special treasure that a conquering king chose for himself among all the spoils of war. This is implied in Ecclesiastes 2:8, where King Solomon records, “I also gathered for myself silver and gold and the special treasures of kings and of the provinces…”. David also used segulah to describe the gold and silver that he gave to build the Temple (1 Chron. 29:3).

The first time segulah is used is in Exodus 19:5: “Now therefore, if you will indeed obey My voice and keep My covenant, then you shall be a special treasure to Me above all people; for all the earth is Mine.” God had just delivered the Hebrews from Egypt; at Mount Sinai, He made them a proposal: if you choose to obey Me, I will make you a special people. They responded, “All that the Lord has spoken, we will do…” (19:8).

Thus, the Jewish people and the God of the universe entered into a marriage contract, or ketubah, as it is called in Hebrew. His bride would have a special purpose: that the pagan world would know the One true God through them. However, with privilege comes responsibility. This would require them to be different from the rest of the world. They were not to make a covenant with the pagan nations and not to intermarry; they were to tear down their altars and burn their idols, “For you are a holy people to the LORD your God…” (Deut. 7:6).

In Deuteronomy 14, God stipulates: “You are the children of the LORD your God; you shall not cut yourselves nor shave the front of your head for the dead [pagan practices]. For you are a holy people to the LORD your God, and the LORD has chosen you to be a people for Himself, a special treasure above all the peoples who are on the face of the earth” (vv.1–2). He goes on to tell them what they can and cannot eat, and the tithes they are required to give. The Torah (Gen.–Deut.), given on Mount Sinai, lists much more. Their “differences” would get the attention of the pagan world around them.

Why Did God Choose Israel?

Why were they chosen? The Lord makes it clear: “The LORD did not set His love on you nor choose you because you were more in number than any other people, for you were the least of all peoples; but because the LORD loves you, and because He would keep the oath which He swore to your fathers…” (Deut. 7:7–8a). God is not partial; He loves everyone the same. But He had a special task for Israel that no other nation would be given. And, He had a promise to keep with Abraham, Isaac, and Jacob (Gen. 12:1–3).

This was not conditional. Though they would be unfaithful and even bring God to a point of “divorcing” his “bride” (Jer. 3:1–8), He would never annul His covenant (Jer. 31:35–36). They would always be His special treasure. And told them that His desire was to make them “…high above all nations…in praise, in name, and in honor, and that you may be a holy people to the LORD your God…” (Deut. 26:19). At times, when they didn’t obey, they lost the blessings…but never the calling. In spite of their backsliding, God would fulfill His purpose for them and the nations would know Him (see Ezekiel 36).

Rabbi Marder shares a great story that illustrates God’s faithfulness: “He was a seventeen-year old boy. The radiation had taken his hair, the surgeons had taken his right arm, and the cancer was taking his life. He drifted in and out of a coma. His father and mother sat by his bedside day after day. Suddenly his eyes opened, he saw his dad, and said, ‘I’m scared. Sometimes I don’t know who I am.’ His father asked, ‘Do you know who I am?’ ‘Why, yes, you’re Dad.’ ‘OK, then,’ his father replied, ‘don’t worry because I know who you are.’” Marder then comments: “With the word segulah…God speaks directly to the soul of the Israelite and reassures the person adrift, an ex-slave, a person ignored, devalued, and bereft of identity. ‘I know who you are,’ says God. ‘You are Am Segulah, My treasure.’”

I would like to add a few words to this excellent and beautiful study;  recently the LORD woke me up early in the morning and showed me the one place in His Word where "segulah" is translated as "jewels." I had often wondered where it was and knew it only appeared to be translated this way once in the entire Hebrew Scriptures. It is in Malachi 3 verses 16 - 18:

"Then they that feared the LORD spake often one to another: and the Lord hearkened, and heard it, and a book of remembrance was written before Him for them that feared the LORD, and that thought upon His name. And they shall be Mine, saith the Lord of hosts, in that day when I make up My jewels; and I will spare them, as a man spareth his own son that serveth him. Then shall ye return, and discern between the righteous and the wicked, between him that serveth God and him that serveth him not."

Over and over the LORD is bringing this truth to me; that those who will be His jewels on the day  He returns are those who fear Him. This holy fear is key to much treasure and intimacy with the God and Saviour of the Bible. Those who are His treasured possession are those who serve Him and discern between the righteous and the wicked. It is all there in this verse:  "In that day when I make up My jewels, My treasured possession, My Segulah."

LORD, I love you so much. Please make me shine like the most precious beautiful jewel to You, to make You smile with joy and happiness at my service, obedience and holy fear and respect of You, now and forever. Please come soon to make up Your jewels, Your treasured possession. Amen. 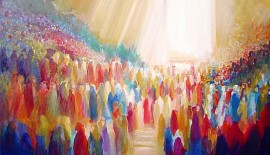