Someone once taught me that, to understand a word  God uses, it is a good idea to study the very first time it is used in the Bible. The first place God uses "Chosen" (in the context of Him choosing man) is in Numbers 16.5. Moses is speaking:

"And he spoke ... to Korah (a rebellious man who, although a priest, tried to control God's will by coming against Moses) and all his company, saying, "In the morning the LORD will show who are His, and him who is holy, and shall cause him to come near Him, even him whom He may choose He will cause to come near to Him."  The word "choose" here in Hebrew is:   "Bahar".  It means much more than the English word.

It means:  "To choose, select, desire, prefer, to enter into a covenant, to be chosen, the best, be joined, acceptable, appointed, excellent."

So you could say that to be chosen (bahar) by the LORD, from the Hebrew, therefore means that: "We are desired by Him, to enter into a covenant, to be our best, by being joined to Him, so we become acceptable, appointed into the position He has for us, so we become excellent!"

God also interchanges this Hebrew word for a very similar word for "chosen"  eight times in the Tanakh (Old Testament). These times He uses "Bahir" instead; one tiny vowel change. This is actually even more special and means:  "Chosen One: one preferred or selected by God to receive special favour."

The times when the LORD uses this, even more precise, word He is referring to either:

And just two times in the whole Tanakh (Old Testament)  the LORD uses another very similar Hebrew word for chosen yet again. It comes from the same root word but has even more meaning. It is "barar" (1 Chronicles 9.22 and 1 Chronicles 16.41).   Both these times refer to people who were chosen for a particular role:

Barar: this Hebrew word for 'chosen', which is only used twice, means:    "to purge, to be chosen, to be polished, sharpened (chiselled), to be kept clean, pure, purify, to show oneself as pure, make bright."

I am sure this rings true for you if you serve the LORD out of a pure heart.  If anyone is appointed by the LORD, to either "gate keep the Living Word of God" (our present-day Tabernacle) or "stand guard over the worship of God," they will have felt this purifying. This  "chosen-ness" by the Holy LORD, in the humbling tasks of leading others in guarding His Presence, studying and interpreting His word correctly, and worshipping Him through praise, requires that our human flesh is chiselled into shape.   And then when we  praise Him, listen to His written word and listen for his spoken word, we become "polished, purged, made clean."

So "chosen" in English is just "chosen". Chosen in Hebrew can be either:

But there is one more  Hebrew word for chosen. I believe God uses this to show a very wrong and different way of "choosing."  It is not connected to the Hebrew root for the three words above but is a completely different word. It is when a human chooses someone or something excluding the wisdom of, or even acknowledgement of, the LORD. If a human chooses something by not consulting the LORD it is therefore not holy. This Hebrew word for chosen is:

It reminds me of how the secular world, and the apostate church, chooses people. I'm known for not being impressed by titles, positions  or fame. I watch people over time, to  see if a person is a good human being who loves the LORD, regardless of whether they are considered high or low among men. Humility gets me.  Your human position  is a mutual thing, to be used to highlight the glory of God, or not, whether that position is hidden or prominent. Both positions can be wasted, or made to  bless God's heart. In the course of our lives we may move from one position to the other, as Joseph/Yosef did. But if our heart is trained by the LORD it makes no difference to how we  behave.  It is attractive and peaceful to find  a believer who is content, either with their hidden role in the kingdom, or  with their place among governments and leaders, knowing both are chosen for them, for a reason, by the LORD. It is equally disobedient to turn down God-given exposure, or a seat among influencers, than it is to war against the LORD hiding you in a hidden place. The Greek mindset of the  church has historically  equated humility only with the down-trodden. But that is not Biblical. The Jewish faith sees position as a positive, because the Old Testament/Tanakh has a strong theme; normal people being given influential opportunities and positions, often against the odds. Moses, Aaron, Esther, Mordechai, Joseph, Daniel, David, Joab, Abigail, Joshua and Samuel. There is a Yiddish saying: "Too humble is half-proud." Use your position for God's love and truth.

But what if God hasn't chosen someone for a position? The very different  word for Chosen, midhar, is only used four times in the Hebrew in the entire Old Testament/Tanakh. Each time God uses it to describe people coming against Himself and/or His people:

Each of these "chosen" people fail. They choose who they thought was fit for position, based on human strength and reasoning, in defiance of the One True God of Israel. But, because they were fighting against God's will and trying to control God's outcome, they all fell.

If we, as believers,  choose according to our human reasoning (mibhar), our plan for our lives and our ministries will falter.  The religious heart often chooses who will be on the team this way.  The LORD knows this. It’s written into His   language.

But, if we as believers  choose according to God's spoken and written word, and praise Him for it whilst we are being "chiselled" by His Word and what He brings to pass in our lives, we will be "made excellent, pure, purged and clean" by Him.  We are becoming His chosen ones and being joined to Him.   God often chooses someone who the secular world and the religious  would not have chosen, for example; the divorced,  the child,  the outspoken prophet, the Jew.

"Trust in the Lord with all your heart, And lean not on your own understanding;

In all your ways acknowledge Him, And He shall direct your paths." (Proverbs 3. 5-6)

Father, in Yeshua’s Name through Your Spirit, teach us to make choices the same way You do. Amen. 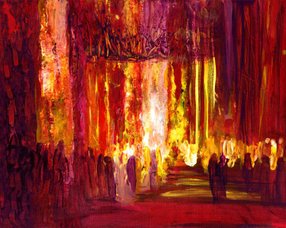